Two local family businesses will become one next month, continuing to assist homeowners in everything from the right sandpaper to use on the front steps or how to fix a squeaky gate.

Chester died in 1941, and his widow ran the store until her death only 18 months later. Their son and only child, John, was in military service during World War II, during which longtime store manager Gerald Morgan kept the business going. The current owners are John’s sons Mark and his brother John, who want to retire. There is no one in the Wanamaker family who wants to take over running the store.

“My brother and I have both been in the business for over 50 years each,” Mark said in an interview “We’re third generation, and the bottom line is it's time to enjoy the other side of life.” 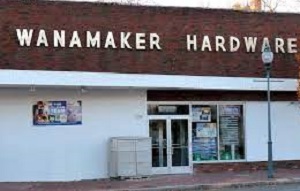 Wanamaker Hardware to become Shattuck Heights Hardware after the sale.

Both Wanamaker Hardware, on Mass. Ave., and Shattucks, on Mill Street, are the go-to stores for everything from snow shovels to wrenches and light bulbs. The two stores have a friendly rivalry and are both known for staff who can answer questions from harried homeowners trying to fix a leaky faucet while offering tradespeople exactly what they want.

“There’s still a need for this location,” Wanamaker said, pleased that the store will continue. “It’s a successful business, and it’s part of the community. The town has been very loyal to us, and I’d hate to see it go away.”

John Wheatley III, who owns R. W. Shattuck, said in an interview that it made sense to buy the Wanamaker store both as a business and as a real estate investment. R. W. Shattuck also owns hardware stores in Lexington and in Hyannis. The Wanamaker brothers want to retire the name, so the store will adopt the Shattuck name.

R. W. Shattuck founded the store and his grandson went into partnership with Wheatley's grandfather, John Wheatley Sr, who began working there in 1920. “My dad [John Wheatley Jr] started working with my grandfather in the '50s,” said Wheatley.

“My dad stepped back about 10 or 15 years ago, and that’s when I came into the business.”

Mark Wanamaker said he and his brother considered a range of possibilities.

“We wanted to make sure our staff members would be retained, and that will happen,” he said. “It took quite a while to find the right mix, and it turned out to be right under our nose. We contacted John Wheatley, and he had an interest, and we sat down and talked, and here we are.”

Wanamaker said Arlington has “a tremendous loyalty base. We are stores of convenience and service; that’s why both stores have survived quite well. Of course, the population in town warrants it.”

Asked what changes he’s seen over the years, Wanamaker said people tend to replace things rather than repair them. “The days of putting a new plug on a toaster are long gone. The toaster gets tossed, and people buy a new one.”

In the interest of helping people learn how to fix things, Wanamaker and his staff, with the help of Arlington Community Media, made a series of brief videos five years ago, which are on YouTube.  They include information about how to choose a fire extinguisher and how to protect outdoor faucets. Here is one of them:

“Service is what drives our business,” said Wanamaker. “Anybody can put something on a shelf and say, ‘Here it is.’ But people want to know more than just where something is; they want to know how to use the product.”

Mark and his brother John will be at the store through the first week of September to greet customers and say goodbye. “It was the family business, and I started as a young boy,” said Mark. “It’s emotional; it’s been an anchor and it’s always been there. It’s like moving out of your childhood home. I will sincerely miss the contact and the ability to help our customers.”

John Wheatley says he does not plan to change a lot. John agrees with the Wanamakers that the business is sound.

”Shattuck has been affiliated with ACE Hardware and Wanamaker with True Value. They are both great distributors, but it will probably make sense to transition the Arlington Heights location to Ace Hardware. To avoid confusion, we’ll rename it Shattuck Heights Hardware.

“We will be freshening the product mix and the display fixtures, but our objective is to keep the store a great place to work and shop. It’s all about happy customers and happy employees.”