Artist loses studio in fire as first responders save some paintings 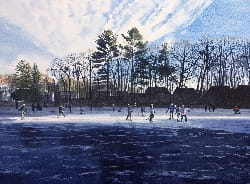 UPDATED, May 11:  Among the many affected by the April 29 fire near the Center was an artist who teaches.

Meredith Leich, 35, whose studio is directly above Thai Moon, is "no longer a usable space," lost paintings, drawings and furniture.

On the plus side, firefighters rescued some large watercolors.

In an email following a May 10 YourArlington phone interview, she wrote, "I want to say again how very grateful I am to the amazing fire crew, who saved so much of my work (not to mention the whole building), and also helped me remove stuff afterward.

"The other tenants of the building were also really kind and supportive that morning. Finally, I hope that Thai Moon and its staff make it through OK. I was a frequent customer, and I could smell their delicious food every afternoon from my studio."

Leich has been teaching remotely at the Art Institute of Chicago while living with her parents near Spy Pond during pandemic. She was "late that morning," walking to Kickstand for coffee when she saw a firetruck at 661 Mass. Ave.

As to what she's doing next, she said she is "a little bit stunned," and continues to clean out the space.

Drawings that were lost included those of a glacier drawing, the source of her animations for the project "Scaling Quelccaya," explained here >>

She was painting Arlington's frozen ponds this winter, "in a celebration of the local skating culture after so many years away, and in anticipation that the ponds may cease to freeze, or at least with regularity, with the increased temperatures of climate change."

The image with this story shows skaters at Menotomy Rocks in February. She writes: "Unfortunately, this painting was quite damaged (I found out it warped and dirty between the floorboards). But I hope to continue the series.:

She is holding a "little fire sale" here >>

Leich grew up in town, went to public schools through Ottoson, then to Buckingham Browne & Nichols.

Salon reopens after fire that could have been worse 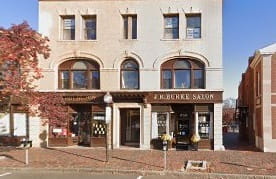 Burke Salon at 659 Mass. Ave. was among many businesses affected. / Google Streetview

A smoky fire that, witnesses say, could have been much worse, affected a series of businesses near Arlington Center on April 29.

The kitchen blaze caused an estimate $500,000 damage to Thai Moon, closing the restaurant, here for 16 years.

The fire also closed a salon, a cat hospital, a digital design studio and an artist, among numerous office shut down in the Associates Block.

Amid the smoke, some good news has emerged: The J.R. Burke Salon reopened Monday, May 10. At 659 Mass. Ave., owner Jennifer Burke has been there 27 years.

In an interview with YourArlington on May 7, she said she is "very fortunate" in terms of damage from the blaze, and she is "hoping for the best."

She called the efforts of first responders "absolutely amazing," adding: "It could have been a lot worse" had the fire occurred overnight.

Alerted by the smell of smoke that morning, she stepped outside and opened the door to Thai Moon, where she saw smoke and heard yelling. An employee there told her the fire had started in the kitchen.

Walking in the rear of building for about seven minutes, she could see smoke streaming from the building.

Other business owners affected have been asked to comment.

This news summary was published Saturday, May 8, 2021, and updated May 11, to add artist's story.