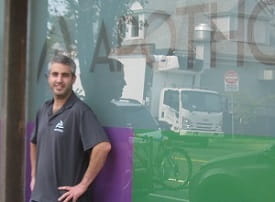 In a walk-through at the Heights site Sept. 15, its glass cases soon to be filled with no-longer-illegal products, Joseph Lekach, Apothca chief executive officer, smiled broadly as he said: "We beat Cambridge and Somerville."

It is Apothca's second adult-use recreational-marijuana store; the first was in Lynn, which opened last October.

The layout of the former printing business, which has moved east to 1340 Mass. Ave., has been revamped to provide separate gateways for medical and recreational customers. Medical customers get to skip the line and go the patients-only area.

Inside, Lekach pointed to space awash with natural light, let in through generous windows, a feature he said he "loves." Frosted glass rises eight feet above the sidewalk, preventing curious onlookers, as per state regulations.

Lekach called the offerings for both "robust." See what is for sale on the recreational side, from Deep Purple Punch to Honolulu Strangler >>

The store limits a customer's purchase to one ounce of flower or five grams of concentrate.

One-eighth ounce of “flower” generally costs $50 at Apothca. "That can be anywhere from $20 to $40 “on the street,” a source told YourArlington.

Lekach noted that a customer does not know what he or she is getting in street buys, so he believes that knowledge is with the difference in price.

For the opening, one town officer plans to be on detail, but Lekach does not expect the kind of crowds when the state's first recreational outlets in Leicester in Northampton opened in November 2018.

Under state regulations, no promotions or specials are offered opening day.

Store manager Andrea Hardy will oversee 33 total employees, with about 23 working on any day on both sides of the operation.

During public hearings about the store, neighbors expressed concerns about parking. Police know that Apothca customers are not supposed to park on Paul Revere Road.

Apart from the 12 spaces behind Apothca, Mass. Ave. and Park have street spaces. If these fill up, a deal with Gold's Gym provides more.

A motion detector with a metallic voice alerts those on the sidewalk when a vehicle is about to emerge from the rear lot.

In acknowledging this occasion, Lekach said in a news release: "We would like to thank the Arlington community and all the Arlington officials for the support and trust they have placed in us. We are excited to be opening the first adult-use shop in Arlington."

Apothca plans to open its third location, in Jamaica Plain, in January. The address is 54 Hyde Park Ave., across from the Forest Hills MBTA station.

This news summary was published Wednesday, Sept. 16, 2020, and updated Sept. 18, to add delay in medical-marijuana opening.