Derek Fleming, who owns Thrive Juice Café, wants the juice bar at 169 Mass. Ave., East Arlington, "to be the friendliest place in town." 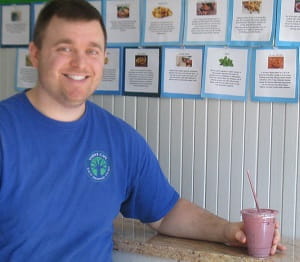 Derek Fleming with irrepressible smile and smoothie. Behind him are bits of culinary education. / Bob Sprague photo

The 30-year-old has much wider goals, but let's focus first on his broad smile. It signals a way he aims to undo  a common stereotype -- that only earthy-crunchy folks frequent juice bars.

Au contraire! He said his customers include burly landscapers as well as a lot of trades people -- electricians, plumbers. After some of these customers expressed initial doubts about his menu, he told some to consider, among other suggestions, the falafel pesto wrap: "I think you'll like it."

They did, he said, smiling again.

Beyond that, "we love our big following of regular clientele," a proverbial list daily with repeat customers.

On a recent afternoon interview near a front window, warmed by sun, Fleming spelled out how Thrive's "concept is working for the town," since he opened in May 2018. He called his menu what "the area really needed."

In the past 16 months, he has expanded his menu, so that it is "no longer just drinks and smoothies." The latter, he said, are seasonal, but juice is not.

Thrive now has tacos on Tuesday, gyros on Thursday, all following his healthy aims. Served since October, he said, are six seasonal soups, made from scratch seven days a week.

Soups include three-bean chili, tomato basil and poblano corn chowder. Fleming called the latter's smokey essence a fave. The soups will be on a new specialty menu not on the full size menu.

To give you a further taste, consider his tikka masala and vegan chili. See the menu >>

781-777-1561
This email address is being protected from spambots. You need JavaScript enabled to view it.

Delivery to Tufts University and within one mile of the store after 7 p.m.

Other changes include a small TV-like screen on the counter showing rotating images Thrive products. On the wall are cards aimed at educating the consumer. One briefly explains turmeric, an Indian perennial herb of the ginger family.

"Flavor is the main driver in what we eat," he said.

In June, Fleming began a monthly newsletter (sign up for it in the store), and it has more than 500 subscribers.

He has initiated rewards. Using a phone number, customers register for a program that earns them 3 percent back in rewards dollars they can save or spend during checkout. They also receive two coupons via text message every month.

In October, Fleming said he gave out more than $2,200 in total rewards.

The green-tree logo continues to identify Thrive Juice Café, as it has since it opened, but its branches are trying to extend beyond the logo's constricting circle, to far-away places, in the West and South.

Fleming has established a organization spanning the U.S. representing his industry -- the National Juice Bar Association (NJBA). He said he began it "as a place for juice bar owners like myself to connect, share our knowledge, our struggles and our successes.

"We are not a fad. We are a thriving segment in the restaurant industry and we are here to stay. We have a goal of pulling our industry together in a way never seen before, in a way that everyone benefits."

That juice spreads out across America -- to an estimated 6,000 locations. Just over 1,000 in the U.S. are independently owned, and not affiliated with a larger franchise or large chain store, he said.

Progress to date in gaining members has been a "trickle." Fleming's fledgling organization represents only 12 so far. He's looking for more -- 25 or 30 to get momentum going.

All current members are out of state -- in California, Texas, Mississippi and Florida.

His goals for the national group are to connect independent juice bars to give them a broader platform to improve the industry as a whole.

He also seeks ways to have juice bars viewed as restaurants.

Joining the NJBA gets member a snazzy window decal telling all that you're part of something national, which will help spread the news about how amazing juice and smoothie bars are. It also aims to:

With all that going on, Fleming has a wife, behind Thrive's social media, and a daughter, Adalyne, born May 3, a day after the store's anniversary.