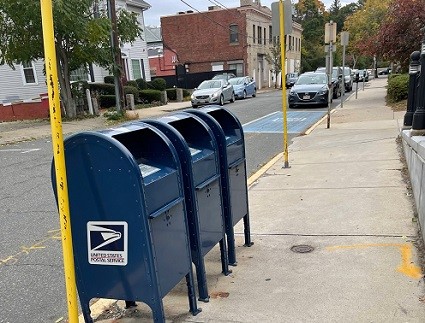 UPDATED Nov. 6: Someone is stealing mail from the boxes in front of the Court Street Post Office. Some of that mail contains checks. Some of those checks have been cashed for amounts much larger than the face amounts.

The U.S. Postal Inspection Service in Boston and the police in Arlington are investigating, though they decline to be more specific.

YourArlington has had email exchanges in recent weeks with four residents who report incidents, two of which might mean that a criminal is washing a stolen check -- that is, changing the face amount and recipient before cashing it.

Checking-washing fraud emerged to greater prominence during the start of the pandemic, and recent cases have been reported in Chicago, Philadelphia and Baltimore.

In Arlington, four told their stories, and three agreed to be identified by name.

Pat Howe noted her mailbox experience briefly on the Arlington email list in October. Responding to YourArlington on Oct. 17, she detailed what happened after April 24, when she mailed two checks at one of the three outdoor mailboxes on Court Street.

“One was to my sister,” she wrote, “and she called me a few days later and said it hadn’t arrived, and she was worried it might have been lost.”

She wrote that her sister “didn’t trust that it wouldn’t be taken from her mailbox ….”

Howe took action via Priority Mail: “I decided to stop payment on that check and reissued a check and sent it.”

“I checked with the other person I had sent a check to, and it had not yet arrived, but at that point, it had been less than 10 days and, frankly I just figured it was just the post office delays I had been hearing about ….”

She decided to wait and see rather than pay the fee to stop payment. “Frankly, after that I kind of forgot about it …. Then in mid-August I received a letter from the bank saying my account was overdrawn, as I didn’t have enough in my account to cover the $13,050 check that was submitted.”

Her bank, Cambridge Savings, took care of the matter, including crediting her account for the loss. She filed a police report and provided a copy of the falsified check.

Saying they would notify the postal inspector, local police confirmed that “there had been a number of reports of checks stolen from that mailbox recently but were a little surprised that my check was from back in April and was just showing up in August.” 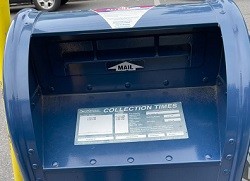 Closeup of narrow mail slot in one of the mailboxes outside Court Street PO.

The second town resident to tell her mailbox tale of woe declined to be identified by name. On the night after Town Day, Sept. 18, the resident said she put two bill payments in one of the boxes in front of the Court Street Post Office. One was for Comcast, and the company did not receive it, she said. The other was a credit card payment of under $1,000. A thief struck within three days.

The resident saw that the account was about $12,000 short. From Bank of America, she learned that her check had been cashed by an unknown woman. Changed were the payee and amount, plus a forged signature line.

She closed her account and opened a new one, saying her bank “has been very helpful.”

After notifying the Arlington police, she discovered that other residents had also suffered lost mail and possibly altered checks after using the same boxes and the same date.

WHAT POSTAL INSPECTORS DO

“The U.S. Postal Inspection Service is the law enforcement, crime prevention and security arm of the Postal Service. We work to ensure America’s confidence in the U.S. mail enforcing more than 200 federal laws, investigating crimes affecting customers, the U.S. mail or the postal system.”

Postal inspectors are required to safeguard all of it — including the people who move it and the customers who use it. Individuals and businesses can take these steps to protect their mail:

– Do not let incoming or outgoing mail sit in your mailbox. Remove it daily.

– Deposit outgoing mail inside the post office. Never send cash or coins through the mail. Use checks or money orders. Ask your bank for “secure” checks that are more difficult to alter.

“I have stopped 4 checks mailed at that location that were not received by the credit cards or banks to which they were sent. Good thing I did those stop checks -- for me it is 5-7 days and if not received, I do a stop check. But annoying. I think I will change where I mail things as well as do more online payments or phone payments.”

A bit later in the day, she added: “I use Sharpie markers that bleed through. Probably why if my checks were stolen, they never arrived but weren't used in scams either.”

Nine days later, Butler commented to YourArlington: “I don't know if there are cameras on those mailboxes and I don't know if the problem is inside or outside. What I do know is I will not be mailing things there.

“The Town didn't get my tax payment. I stopped it and went and paid in person. Leader Bank didn't get a mortgage payment. Ditto. Today it was Eversource that hadn't gotten the check I had mailed 9/13/22 … so I paid by phone for two months and did yet another stop check.

“As I had mailed all my mail at 10 Court St., I now plan to mail in the Lexington post office and see if this stops happening.”

The fourth resident affected was Carla Dorato, owner of the Artful Heart, the Mass. Ave. gift shop next to Anderson Florist.

Three recent payrolls, mailed at a box in front of the Court Street Post Office “never arrived,” she said, adding that no forged checks have turned up.

Ironically, these boxes were changed, with the goal to make them safer, just before the pandemic, in January 2020. Residents used to be able to drive up and drop mail into a larger slot. In part because of theft concerns, boxes with much narrower slots on the sidewalk side were installed.

These local incidents have come to light in the context of a series of reports nationally. Consider:

Incidents in Arlington may be part of a broader trend, but no one involved in investigating the issues locally was eager to discuss it.

Anthony Calitri, Court Street manager, was asked in an Oct. 11 phone call whether he is looking into the Arlington incidents. “No comment,” he said.

Asked whether Arlington police are involved, he had the same answer.

Capt. Richard Flynn, the APD's public-information officer, was asked later that day about the role of local police. “I have provided the information requested [a police report] and available on this matter at this time. It is currently under investigation.”

Calitri referred YourArlington to the regional U.S. Postal Service representative in Boston, Steve Doherty, who was on vacation.

Inspector: 'We are aware'

On Oct. 13, Danielle Schrage, a postal inspector who is also a public-information officer in the Boston division, wrote: “I can share that we are aware of the check thefts in Arlington and postal inspectors are working closely with the Arlington Police Department on the investigation.”

Asked how many cases from town have been brought to inspectors' attention and over what period, she wrote:

“Unfortunately, I cannot give you any specific numbers regarding how many cases have been brought to our attention and/or to the Arlington police’s attention.

“What I can do is urge your readers to contact us if they think they have been a victim of mail theft so that we can be sure we are aware of any potential cases out there.”

In a follow-up, she was asked to confirm that her office was investigating “check-washing,” and she declined to do so.

As local and regional investigators probe these matters, how can the public protect itself?

Butler had some suggestions:

This news summary by Bob Sprague was published Wednesday, Nov. 2, 2022, and updated Nov. 6, 2022, with this note: Following publication of this article, numerous residents have posted on social media about their experiences with the outside mailboxes at Court Street. Those who want their cases identified in future reporting about this subject should email details, including full name and the date, time and nature of the incident, to This email address is being protected from spambots. You need JavaScript enabled to view it.