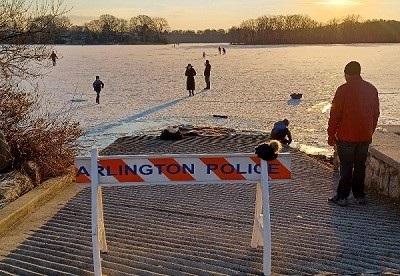 UPDATED Jan. 25: Arlington police and fire personnel responded at 4 p.m. Sunday, Jan. 23, to a call of a person who had fallen through the ice at Spy Pond near Linwood Street -- the last of three rescues that day.

Public safety officials were able to conduct a shoreline rescue using a lifeline. A police report said the Somerville resident, 53, was taken to a hospital.

Officers said they made several announcement for those remaining to leave the ice.

The next day,  town resident Steve Morgan took this shot showing at least seven people on the ice. For more photos, see Facebook >>

Earlier that day, about 12:30 p.m., police responded to a report of a man falling through the ice. An officer ran about 100 yards on the ice to throw a rope to the person in the water, and with the help of others, was able to pull to safety a Cambridge man, 50, who said he had been skating.

About an hour later, a 62-year-old Arlington man was rescued from the same location by an unidentified man, who pulled the victim in a sled to shore. Police said the victim said he thought he was going to die.

They also remind residents to keep dogs off the ice. These situations can have tragic outcomes as it puts the dog, the owner, and the first responders in unnecessary risky situations.

Please keep your yourself, your pets, and first responders safe and stay follow these ice and cold-water safety precautions provided by the Massachusetts Emergency Management Agency.