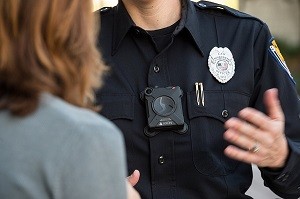 UPDATED Jan. 21: Arlington police have received a state grant to help pay for body cameras, and the chief is eager to move ahead, but she is in waiting mode. Once she can move ahead, the start-up funds will be negotiated with union members.

"Like many other departments in Massachusetts, I am waiting on policy from the committee, and I look forward to implementing the program in Arlington as soon as possible," Chief Juliann Flaherty wrote in an email Jan. 11, referring to the state committee charged with providing guidelines to local departments.

Flaherty wrote that her department applied for and was awarded $43,035 on Dec. 6, from the Executive Office of Public Safety and Security. The Mass. Police Reform Bill established a committee to study body-worn cameras and develop policy for the Massachusetts police departments and are behind schedule on issuing road maps for moving forward.

The State House News Service, via The Boston Globe, first reported some background about the delay Dec. 29, and the Herald followed up with its own report.

The commission set up under the 1-year-old reform law has missed its deadline to propose regulations governing standards for the procurement of body-worn cameras and vehicle dashboard cameras by law enforcement.

The law that Gov. Charlie Baker signed Dec. 31, 2020, required a 25-member task force established by the Executive Office of Public Safety and Security to file by July 31 an interim report on its work product, including proposed regulations and any legislation that might need to pass to put the regulations into effect.

The law requires the task force to propose regulations establishing a uniform code for the procurement and use of body-worn cameras by law enforcement officers to provide consistency throughout the state, and to propose minimum requirements for the storage and transfer of audio and video recordings collected by body-worn cameras.

The July 31 report was never filed largely because the 25-member commission didn’t come together until well after that deadline and held its first meeting on Sept. 14, the State House News Service report says.

YourArlington partner Patch first reported the town's grant award as part of $4 million given to 64 departments in the state's first round of funding, with a goal of deploying 9,000 cameras over five years.

Currently, Patch reported, 10 percent of Massachusetts municipal departments operate a body-worn camera program. A poll conducted by the Massachusetts Chief of Police Association indicated that 75 percent of departments in both major cities and smaller communities are interested in starting a program.

Long-stalled action could occur this week. A legislative commission studying the use of police body cameras is scheduled to meet Tuesday.

“In light of the compressed schedule caused by the delayed convening of the members, the task force does not presently have work product in the form of draft recommended regulations or proposed legislation to provide in this report,” task force chair Angela Davis wrote in a Dec. 22 letter to Sen. Walter Timilty (D-Milton) and Rep. Carlos Gonzalez (D-Springfield), the co-chairs of the state Legislature’s Public Safety and Homeland Security Committee, as reported by the Herald.

Davis, the state’s assistant undersecretary for law enforcement and criminal justice, said in her letter that the task force has been “hard at work” since convening and intends to develop a draft of the recommended regulations “by early” this year and make them available for public input during the remaining public hearing time frame.

According to minutes from the task force’s Oct. 26 meeting, the Herald reported, Davis described a January to April timeline for drafting a report but some task force members called that “aggressive” and “unrealistic.”

Baker, a Republican, said body cameras “improve public safety, strengthen community-police relations, and enhance the values of transparency and accountability.”
“This technology offers municipalities a valuable tool in support of municipal police in their efforts to ensure public safety and transparency in their communities,” the governor said.

YourArlington is trying to find out what took place.

On Thursday, Jan. 20, the town issued a news release about the grant, which says in part:

"Subject to successful collective-bargaining between the Town of Arlington and its police unions, the funding will allow the Arlington Police Department to equip every officer in the department with a body-worn camera. The grant also will fund an on-premises server for secure video storage for the department.

"While the final start-up and annual maintenance/storage costs are pending, the department intends to use the grant funding to offset much of the startup costs and fund the balance of the program in its annual budget.

"We are very appreciative to receive grant funding to support this technology which is an important step in maintaining our department's transparency and accountability within the community," Chief Flaherty said in the release.

The Baker-Polito administration included funding for this program as part of its fiscal '22 capital budget plan. The grant application process requires each municipal department to submit a comprehensive deployment plan that describes a deliberate and phased plan to deploy the technology, as well as specific ways the proposed program will enhance the agency’s mission.President Barack Obama’s Task Force on 21st Century Policing placed a priority on body-camera research and camera programs.

The task force’s final report indicated that officers wearing body cameras had “87.5 percent fewer incidents of use of force and 59 percent fewer complaints than the officers not wearing the cameras.”