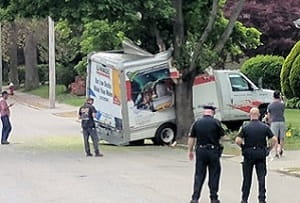 A limb of a town-owned Norway maple that was 7 feet above Dow Avenue, which had been struck several times in the past, snagged a 2007 white Ford U-Haul truck with Arizona plates on Sunday, May 17.

The driver told police he was not injured.

The police report of the 1:52 p.m. incident said the driver, who was traveling south, tried to pass under the limb, but struck it.

The driver said the truck "violently spun around" and came to rest, facing west on the front lawn of a private home against a town-owned tree. The truck had extensive damage to the cargo area.

Police spoke by phone to the Dow Avenue home owner, who was told that the only damage to his property was the lawn.

Police requested a tow and the tree department, which removed part of the tree so the truck could be taken away.