OPINION: Before town police get body cameras, some questions 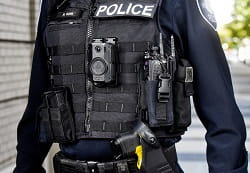 The following opinion piece was written by John Ellis, a member of the Finance Committee and Town Meeting. The opinions expressed are his own.

This year’s town budget includes $43,000 in funding to cover data storage costs for the videos police body cameras will collect.

This money is in addition to the cost of the cameras themselves (approximately $110,000 from an asset-forfeiture account), but does not include an unknown amount for additional stipends the police officers' union will request to wear the cameras.

In Concord, my understanding is that stipend is $1,000, plus additional paid time off per officer. In other communities’ officers have asked for and received higher stipends.

Because I believe elected officials should be developing the policies and procedures related to the recording and storing of videos of residents, I have submitted an amendment for Town Meeting to consider. That amendment to the police budget would set aside the $43,000 in funding until the Select Board has reviewed and approved all the costs and policies associated with the body-camera program.

I’d like to explain why, but first I want to clarify:

I just think an elected body should be the one making decisions about how the videos will be used, stored and how resident privacy will be protected. Allowing our police department to video-record the aftermath of a 911 call and potentially heartbreaking moments should be done only after thoughtful public engagement.

Furthermore, the experience of other cities using body cameras demonstrate cameras are not a panacea to transparency, and the policies surrounding the cameras are as important as the cameras themselves.

In just the past year, some communities have had to hastily write new procedures after cameras were improperly used to film peaceful protesters. Other communities have found departments unwilling to release body-camera videos even when recordings had been made and their release was clearly in the public interest. In yet other communities’ policies allow for individual officers to make the determination regarding when a camera is on or off.

And last then weekend this happened: “Police say body cameras were off 'for unknown reasons during Virginia Beach shooting.” I suspect the 'unknown reasons' might be in part explained by the policy they use for allowable camera deactivation and the policies related to noncompliance.

Below are some of the specific issues the Select Board should review and approve of before body cameras are implemented.

Given these and other privacy, cost and policy questions related to body cameras, my hope is we can pause on their implementation until an elected body has approved of a program that is right for Arlington.

This viewpoint was published Wednesday, April 14, 2021. Ellis previously served on the Arlington Tree Committee, where he managed a townwide tree inventory.  The business he founded, Optics For Hire, has offices in Arlington and Eastern Europe. Earlier, Ellis was an activist, as described here, with the anti-hate speech organization Sleeping Giants. In his free time, he coaches youth soccer and baseball.

NOTE: Reactions to this column should be sent as a letter to the editor, to This email address is being protected from spambots. You need JavaScript enabled to view it..