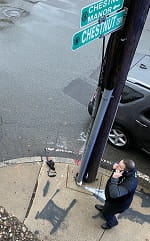 At 6:50 a.m., police were dispatched to the area of Chestnut Street at Chestnut Terrace following a report that a pedestrian had been hit. On arrival, officers determined that the female victim, an 81-year-old Arlington resident, was struck by a 2017 Ford Explorer driven by a 48-year-old Saugus man.

The victim was Ann B. Desrosiers, according to Paul Schlichtman who lives in the same building.

He reported the death on the Mass. Current Residents Facebook Group on Thursday, Jan. 2, noting she was "a long-standing member of our condo board and had a passion for the gardens on the perimeter of the property. She was struck and killed as she attempted to cross Chestnut Street Tuesday morning, on her way to 7 a.m. Mass at St. Agnes.

Arlington police declined to confirm the death and referred YourArlington to the Middlesex District Attorney's Office. That office confirmed the death in a Jan. 2 news release. On Jan. 9, Meghan Kelly, of the DA's office, reported that Arlington police cited the driver with a civil infraction for failure to stop for a pedestrian in a crosswalk. The investigation continues, she said.

The victim, who was not identified in first reports, was transported to an area hospital with serious and potentially life threatening injuries, where she died from her injuries on Dec. 31, a DA's news release said. The release does not detail the injuries. No charges have been filed in the case, BostonGlobe.com reported.

Officers were seen recovering a walking cane from the scene, WCVB reported, and the photo, above, taken by Schlichtman showed the cane and a shoe.

The driver remained at the scene and is cooperating with the investigation, which remains active and ongoing, the statement from John Guilfoil Public Relations said. The driver has also not been identified.

Leading the investigation is the Massachusetts State Police Collision Analysis and Reconstruction Section.

The Arlington police log for the Dec. 31 incident is captioned "crosswalk violation," but the details of the log are not available when a case remains under investigation.