Officer White on job as resource for schools in town 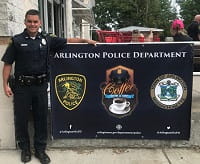 He replaces Inspector Stephen Porciello, who held the position since April 2013.

White began his career as a patrol officer for the department in 2012, and most recently was assigned to the Homeless Outreach Program, where he worked with community partners to provide service, care and resources for the town's homeless population.

He has also served at the Arlington Health, Recreation and Cops Camp since 2015, where he taught young people about Arlington's Police and Fire Departments as well as health and safety issues.

"It's been a career-long goal of mine to hold this position and have a chance to represent the department in the schools," White said in an Aug. 21 news release. "Through my first seven years as a patrol officer, I have been lucky to be chosen to participate in many student related and community policing activities. I have enjoyed working with Arlington's youth and building relationships between them and the police department, and I'm thrilled to have this opportunity to work with students every day."

White is an Arlington High School alumni, graduating in 2004. Before his career in law enforcement, he worked as a special-education assistant teacher, student supervisor and dean's assistant at Minuteman High School.

He also served as a head coach and assistant coach for ice hockey and lacrosse at Arlington and Minuteman high schools.

White was awarded Certificates of Commendation by the Police Department in 2016 and 2019, and was recognized in 2014 for his response to the Boston Marathon bombing. He is trained in LAMP Trauma, ALERRT Active Shooter protocol, Crime Scene Preservation, Diversity/Transgender Training, Autism Training for Police and is certified in COBWEB and narcotics identification.

"Officer White was a natural choice for this role, and I'm confident his time working with young people and performing community outreach, coupled with his experiences as a coach and educator, has prepared him well to protect and serve Arlington students and educators for years to come," Acting Chief Juliann Flaherty said.