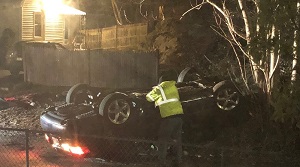 A 64-year-old Arlington woman suffered head injuries in an April 3 accident after the car she was driving flipped on Cutter Hill Road.

After 11:30 that night, an Arlington officer was investigating a single-car motor-vehicle accident at Summer and Mill when he heard "what appeared to be a car engine picking up speed and screeching tires."

In his report, the officer wrote: "I walked slightly over to the corner of Mill Street where I had a view of the entire length of Mill Street up to Mass. Ave. At this location I observed a dark-colored sedan operating at a very high rate of speed ....

The officer followed the path of the vehicle and saw it lying horizontally across a narrow portion of Cutter Hill. At this point in the road, the officer wrote, "the terrain changes and the road narrows due to a vertical rock ledge on the left hand side. In front of this ledge is a small incline consisting of dirt and rocks.

"It appeared that the operator ... drove at a high rate of speed on the left hand side of the road, over the small incline into the rock ledge. I observed the vehicle to be completely flipped over onto the hood. I immediately called for Rescue and attempted to make contact with the operator .... [who] was strapped into the front seat with her seat belt on. She was making gurgling sounds, spitting out blood and not verbally responding."

Two other officers arrived and were able to free the woman from her seat belt and seat. Once freed, officers placed her sitting up, "where we observed her breathing with a pulse but not responding."

Rescue arrive and, as they prepared her for transport, she began moving her arms and legs. Despite head injuries, soon after, Fire Department personnel said she was verbally responding as she was taken to Lahey Hospital.

The State Police Crash Reconstruction was contacted, and a trooper declined the case, the report said.

The operator of the 2007 dark blue Hyundai Sonata was issued to the Registry of Motor Vehicles a notice called an "immediate threat," under which a license may be suspended.

The car is registered to a North Andover resident and sustained major damage, police said.

One officer responded to Lahey Clinic Hospital and received the following information regarding the driver's injuries. At this point she is able to make grunting noises and not formulating any words or sentences. Her face is severely swollen and that could be a reason she was unable to vocalize, the report said.

There does not appear to be life-threatening injuries at this time, and all are in the area of the face.

The vehicle was towed to Palmer's Garage.