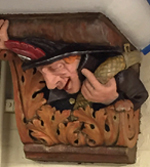 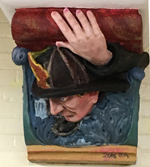 A fierce firefighter with an ever-vigilant gaze, protected by a hat that could be from the early 20th century, appears to hang on for dear life, his hand thrust into the foreground.

You might not have noticed him high above the main bay of the renovated Central Fire Station, which opened last fall.

But after months of work by art students from Arlington High School, you can see him more clearly.

The firefighter, now brightly painted, is an ancon, which architects know is a projecting bracket or console supporting a cornice.

Other firefighter images grace the building's corbels, or a kind of bracket jutting from a wall. Instead the standard utilitarian design used in 1926, when the station was designed, George Ernest Robinson, its architect at the time, was interested in bringing history and the decorative arts to the interior spaces of firehouses.

In addition to its unique octagonal design, Robinson included images from the firefighting past.

One of the many goals in the $6.5 million renovation of the station in the Center by architects Donham & Sweeney and PMA Consulting was to preserve many of its historical details. Among them are the decorative corbels that appear to stand watch on the apparatus floor.

But the images lacked color, and the rest of the station shows off a variety of hues.

Thus, over three months, a trio of Arlington High School visual-art students and one firefighter participated in painting the corbels and ancones depicting firefighting personnel. Brendan Ambo, Sam Edey and Elpitha Gheorghiou were given the opportunity to paint two of them. Arlington firefighter Shawn Sullivan painted a third.

David Ardito, interim director of visual art for the Arlington Public Schools, supervised the young artists as they worked after school to complete their masterpieces.

"We want students to feel the joy of giving their gift of creativity to the community," Ardito said in a town news release. "It has been wonderful for all of us to get to know so many firefighters who have been so helpful and supportive of this project."

One goal of the AHS visual-art department is to engage as many art students as possible in the public art efforts that are emerging all over Arlington. Students are encouraged to contribute to townwide efforts by other artists and arts organizations to make art a part of Arlington residents’ everyday lives.

"I want to thank the students and Shawn for contributing their talents to the renovation project," Fire Chief Robert Jefferson said. "Their work provides a reminder of the support we have in our community and a creative reminder at that."