The Fire Department will also have its annual SAFE (Student Awareness of Fire Education) open house for children Oct. 3, from noon to 2 p.m. Firefighters will be on hand to teach fire safety and talk with the children. Papa Ginos will be supplying pizzas and drinks. Firefighters will be showing videos, doing tattoos, and interacting with the visitors. Please stop in for some fun and education.

UPDATED, Oct. 2: Arlington's Central Fire Station, an icon identified with the town's early 20th century, has been returned to 21st-century life for $6.5 million. On a tour of the five-bay historic building, wedged between Broadway Plaza and Mass. Ave., the last of three stations to be revamped, Chief Robert J. Jefferson was pleased to points out old and new.

Among the high points of the latter is an environmental distinction. While the Highland station, whose renovation was completed in 2011,  project was named LEED Silver, Central is LEED Gold, the first public building in Arlington to gain this title.

In addition, Central station now complies with the Americans With Disabilities Act. Among other features, the station has an elevator, a key aid to public access.

Further, for the safety of firefighters, an industrial-strength washer and drier in the basement cleans heavy gear used to protect against hazardous waste, among other dangers. That's better than using a garden hose, as was done in the past.

These are among many changes aimed at improving life for those charged to protect the town when fire strikes.

Preserving the station's noted exterior was a chief aim for Donham & Sweeney, the Boston architect, and town officials. Jefferson says they have succeeded. In an Aug. 17 two-hour tour, YourArlington witnessed a fresh, practical structure dotted with numerous reminders of the past.

Plans aren't set yet, but the public could be invited to come inside the station on Town Day, Sept. 12. In the meantime, follow Jefferson for a preview: 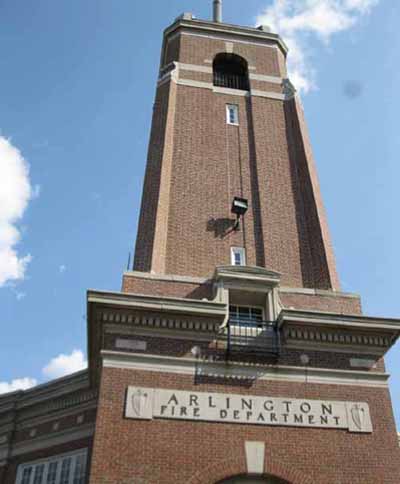 Steamy outdoors but cool within, we met in a new upstairs room that used to be a tower where hoses once hung. At a conference table used for vendors, officials and training, the room is part of an administrative area -- now called AFD Headquarters -- that has moved from the Community Safety Building, where meetings took place at a kitchen table.

The move was crucial. From his experience as a firefighter, dating from 1982, the year before Community Safety opened, Jefferson said he knew that the men "didn't know the old chief."

Now as many as 14 firefighters have living quarters where the chief is. Jefferson has been in charge since 2008, the year after the Park Circle Station, the first of three to be renovated, opened.

As we talked, artifacts of Arlington's firefighting history continued to turn up like ghosts amid modernity.

On the wall hangs a large Samsung TV, while on the conference table sits a black, metal model of a 19th-century fire wagon. In a corner, still wrapped in clear plastic, is a lengthy, 19th-century Eureka nozzle, made shiny after work a Brockton craftsman worked his magic. On the floor lie parts of a painted fireplace mantel.

The yearlong project completes less-substantial work done in 2011. Following a complete gut of the interior, the work by a variety of contractors (all noted below) included plumbing, heating, electrical, removal of hazardous material and repair of a leaky roof.

The Central Station was aging, its facilities inadequate for a modern force. A plaque in the renovated station says it was originally built in 1924, but an unpublished history of the town department written by Robert M. Washburn reports it opened in 1925.

Firefighters would go to the chief and get what they needed. At the time, the chief was Warren French, followed by Bob Casey, Perry Cayton, Rich Maimone and, until 2007, Allen McEwen.

More ghosts of history: In the hallway of the administrative area, beams dating from the original station are now exposed and painted red. On a shelf between the red beams built by a firefighter is an old ticker-tape machine. It used to keep a record on tape of signals from a red pull box, which used to hang from poles in town.

For example, a fire alarm pulled at the Brackett School was number 685, and firefighters knew the code and where to go based on a series of rings.

Fully present is the state-of-the-art kitchen. On the day of the tour, one in which firefighters had moved in, three checked out the new digs. One, looking to make himself at home, is a cook.

In the dorm area, to which the general public has no access, are three rooms, each with two beds.

The rooms for ranking firefighters include computers for administrative duties. A library provides a place for firefighters to study for tests.

In a stairwell, extending through three floors is a 28-foot pole from McIntire Brass, Somerville.  Once it is installed, firefighters will slide down to answer a call.

Mix of present, past

We walked down to ground level, to the apparatus floor, where a bay door was open to cars breezing by on Mass. Ave. Joining the expected modern vehicles -- Engine 1, Ladder 1, a boat used in rescues at Spy Pond or Lower Mystic Lake -- is a relic, a 19th-century Eureka.

The chief fielded a question from deputy chief Chip Ryan, the police chief's brother, and we moved on to a room with tall red lockers, holding protective clothing. The lockers have plenty of room to breathe, allowing gear to dry. Earlier lockers, castoffs from Arlington High, were closed.

We head for the basement, where a new furnace is a shadow of its former self. Gone is the behemoth that used a 3,000-gallon oil tank, which could use hundreds of gallons a day.

The basement is missing something else -- the occasional homeless person who would sneak in and camp out.

While improving public access, the building has added significant security measures, including card access and video surveillance, which aim to prevent uninvited guests.

Jefferson said video showed two entry attempts in July. In another case, video shows a vehicle bumping the vehicle of a contractor and driving off. Using the video, officials identified the driver.

Another basement room provides space for electronic equipment from Sprint, which pays the town for the space. Previously situated atop the hard-to-reach tower of old station, the gear is easier for company to reach here.

We pass the new washer/drier for heavy protective clothing, the only one in town's three stations.

Across a hall, inside the gym, which all three stations have, a firefighter is finishing his workout. A federal grant helped pay for the equipment, which includes a treadmill, weights and punching bag.

Jefferson called the gym "a benefit with benefits" -- that is, a feature that firefighters were glad to have and one that supports better health.

Also in the in basement is a training room for firefighters, which serves as a backup emergency operations center, and space for the emergency management operation, which coordinates volunteers.

Heading outside, on the Franklin Street side, we gaze at the 1920s exterior, to which the architect has remained true. Except for the new all-glass garage doors, which replaced the conventional solid-steel doors, the renovation has restored facades to their original appearance.

Near the main entrance, on the side of the building closest to the monuments, is a plaque dedicating the building to Walter Horace Peirce, chief from 1907 to 1923.

Asked whether he is happy with the result, Jefferson remains typically low-key. "Yes," he said, adding, "We're still pickin' away."

As a member of the Permanent Town Building Committee, he is familiar with how projects conclude, with a lengthy punch list of items to be completed.

The day we toured, landscaping remained to be completed.

The owner’s project manager is PMA Consultants of Braintree.

Selected dates in the history of the Arlington Fire Department

From a list by Robert M. Washburn, historian of area fire operations

1818: First mention of fire matters in Arlington town records. At the annual meeting of the town, the selectmen were instructed "to purchase fire ladders, fire-ward station firefighters, fire hooks, and such other implements as are needed."

1981 - Due to constraints of Prop. 2 1/2 tax reform, the office of Public Safety Director deleted, command is by the Director of Fire Services (later back to being "Fire Chief"), Engine Company (at Headquarters) and Ladder Company 2(at Highland) are in service only when there is sufficient manning.