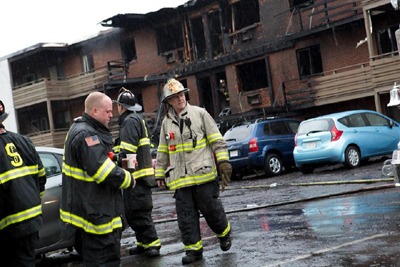 Smoking materials in mulch called cause

UPDATED, May 7: Flames ripped through the Brookside Condominium Complex at Arizona Terrace in East Arlington early Tuesday, May 5, and one person has died, officials have confirmed.

The improper disposal of smoking materials onto mulch near a condominium building is believed to have caused the fatal fire, officials said in a statement.

Officials said Wai Cheong Lee, 47, died after the fast-moving flames trapped him inside his unit.

Town Meeting was told May 6 that 15 families were affected.

"This fire claimed the life of a man because someone discarded something improperly, most likely a cigarette," Ryan said in the May 7 statement. "Our thoughts are with the victim’s family at this time."

Coan added, "Mr. Lee died in the middle of night where he should have felt safest -- his home. Our national slogan is 'Fire is Everyone’s Fight,' and I would ask people to take that to heart and be responsible for fire safety. Everyone. Everyday."

Jefferson said: "On behalf of the fire department and the residents of Arlington I offer condolences to Mr. Lee’s family. Firefighters see first-hand the heart-breaking losses victims of fire suffer when they lose their home and possessions. This terrible fire affected so many individuals and the community at large."

"A man died in this fire and tragically the situation was completely avoidable," District Attorney Ryan said. "The fire started because someone carelessly disposed of smoking materials, most likely a cigarette. It appears that mulch caught fire and the flames quickly spread to a wooden balcony and stairway."

The four-alarm fire broke out on the third floor of the condo about 4 a.m.

Jefferson said in an earlier report that everybody inside was able to get outside safely, but crews still needed to do a room-by-room assessment of the complex. Apparently, that check led to the discovery of a body.

Jefferson told Fox News that 36 units were destroyed or damaged, as well as some vehicles in the parking lot.

Crews had to use a battering ram on one door after there was no answer.

Firefighters from Cambridge and Somerville assisted Arlington in fighting the blaze.

In a morning news release May 5, state Coan, Ryan and Jefferson, announced that an individual had died as the result of the fire. The name of the deceased was not released next of kin were notified.

"Residents were woken up abruptly, Ryan said in the release. "Many of them heard pounding on their doors and cries to ‘get out quickly.’ This still is an active investigation with a great deal of debris for investigators to comb through as they seek to determine exactly what happened early this morning."

The state fire code has regulations on the use of mulch that prohibits the new application of mulch within 18 inches around combustible exteriors of buildings, such as wood or vinyl, but not brick or concrete. Residential buildings with six units or less are exempt from this regulation. The regulation applies to all other buildings including commercial properties.

Coan said, "The mulch around this building was closer than the required 18 inch barrier and the property owners will receive a non-criminal citation for violating the fire code. Similar past fires were the very reason this provision of the code was enacted."

Fire Chief Jefferson stated, "Mulch is a combustible material that can be easily ignited by improperly discarded smoking materials. The risk is that what starts as a small outdoor mulch fire can quickly spread to buildings. A mulch fire can be well underway before someone notices or is alerted by smoke alarms as happened with this terrible fire. It is important to be a safe smoker: don’t toss cigarettes into mulch which can easily catch fire. In addition, property owners should provide appropriate receptacles for disposing of smoking materials."

Ryan commented, "This is a sad and unfortunate situation involving the loss of life in our community. The Arlington Police Department will work closely with the state fire marshal, Arlington Fire Department, and Middlesex District Attorney’s Office to conduct a thorough investigation."

Thanks to the Housing Corporation of Arlington (HCA) for setting up a fund for those affected by the May 5 fire at Brookside Condominiums. When making a donation, please be sure to note in the "Designation (Optional)" field "Fire." Funds collected will go to assist those displaced by the fire. You can make your donation here.

Pam Hallett, Precinct 21 member and head of the HCA, said 15 families are affected.

BostonGlobe.com reported May 5 that Purvish Patel, 30, who lives in a second-floor unit, said in an interview at the scene that he awoke to the commotion and stepped out his door to see the unit to his left completely engulfed in flames.

"I came out and looked to the left and the entire balcony area was on fire," Patel told The Globe. "It was about 15 feet away. ... I ran like crazy."

He also saw an SUV burning in the parking lot one floor below. The flames eventually shot up from the car to the second and third floors of the building, he said.

"It was scary," he said. "Windows were exploding. Things were flying out of apartments. The roof was on fire."

Patel, a molecular biologist, has rented the unit for about six years. He said he lost everything he owned in the fire, including a 2007 Honda Accord that he used to get to work at a small start-up called Quanterix.

Matthew Marucci, who lives in a first-floor unit a few doors away from where the fire was the fiercest, said he ran outside barefoot.

A firefighter later broke into a window in Marucci’s unit and recovered some flip-flops and his phone.

Marucci, who has been living in the building for about a year, said he lost most of his possessions, but "it’s only a few thousand dollars, so it’s not the end of the world."

Heather Harris, a nearby neighbor, said the sounds of the fire awoke her. She and other members of the family came out and saw flames pouring out of the three-story building.

Authorities say the fire broke out at approximately 4 a.m., at the Brookside Condominium Complex at 1 Arizona Terrace, in the neighborhood where Mystic Valley Parkway intersects with Route 16.

In an email, the town reported at 3 p.m. May 5 that the fire had been contained and public safety and health officials, along with the Red Cross and local housing agencies are working to assess resident needs and provide support to displaced residents.

Officials are still evaluating resident needs and held a meeting for residents and owners of the property Tuesday, May 5, at 6:30 p.m. at the Thompson School.

The town is contacting these residents directly, but are also asking that this invitation be passed along to any resident or owner of this property. Note that this meeting is for residents and owners who reside at Brookside Condominium complex only.

It is understandable that residents and businesses want to help those who have been affected. However, Health and Human Services officials are asking that residents hold off on donations while they focus on the immediate needs of residents. Coordination of donations is being organized, and the town will provide that information when it becomes available.

Town officials would like to thank residents and businesses in advance for their cooperation. Your help allows public safety and health officials to continue to help those affected.

Globe, May 5: Blaze started in mulch

This report was published at 7 a.m. Tuesday, May 5, 2015, and updated May 7, to add details from Town Meeting and victim's name.