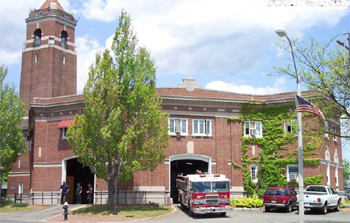 UPDATED, May 28: A yearlong renovation of the historic Central Fire Station, which serves as Fire Department Headquarters, at Monument Park in Arlington Center, is to begin soon.

The renovation, budgeted in the fiscal 2015 capital plan at $6.05 million, involves a complete demolition and remodeling of the interior of the building.

"The project should be complete in less than a year and we hope to move back in by July 2015," Chief Robert Jefferson wrote May 27.

A town news release says it will retain its historical character, while incorporating modernized heating, electrical and plumbing systems. It will also have a state-of-the-art fitness center and training classroom.

Expected costs have increased because of "general escalation in building trade pricing and the need for additional reinforcement of weight-bearing floors," the capital planning report to Town Meeting says.

The contract for the Central Fire Station construction has been awarded to Boston Building & Bridge Corp. of Milton, Domenic Lanzillotti, town purchasing agent, wrote May 28.

The Central Fire Station was built in 1926, when its unique, five-bay design was a response to the odd intersection of Broadway and Mass. Ave. The building’s frame has remained mostly unchanged, and is widely considered to be a historic icon of Arlington Center.

During the renovation, Engine 1 will remain on the apparatus floor. Its personnel will be housed in a trailer, on the Broadway side of the headquarters parking lot.

Arlington Center and the East End response district are not expected to see a disruption in service or coverage.