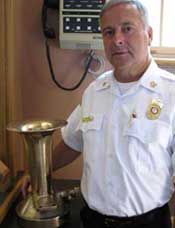 As the renovated Highland Fire Station nears completion, its first upgrade since opening 82 years ago offers touches from Arlington's firefighting past as well as advances that point to the future.

From the 19th century is a wagon-wheel skylight designed by Charles Gott, who died in 1907 and served for 30 years as town fire chief.

For the present and future, Highland is the town's first energy-efficient fire station to warrant LEED, or green-building, status. In addition, it has a wireless communications network.

"The new Highland Station will allow the firefighters to work in a safe and healthy environment," said Fire Chief Robert Jefferson.

"Basically uninhabitable," Jefferson said, referring to the station that opened in 1929. The $3.7 million project aims to change that via much-improved living quarters for firefighters as well as settling serious practical issues: For about 17 years, modern fire trucks were too large to fit in the station bay.

After lowering the floor about 20 inches, the largest ladder truck fits now, with four inches to spare. Two other trucks that previously did not fit now do.

"Similar to Park Circle prior to renovations," he continued, "the stations were old, unhealthy, and a poor work environment. Some apparatus could not be housed in the building, and the overall condition of the building was deplorable. Situations like that make it not pleasurable coming to work every day.

"The firefighters at the Park Circle had a renewed energy returning to the new station [in 2007], and it became a desired assignment. The talk now about the Highland is now very similar. Although the real work of all firefighters is out on the street, these men and women work 24-hour shifts, like a family and the work environment is very important. We all look forward to the last of the three renovations at Central Station in the near future."

A tour of the revamped Highland on July 28 revealed the following highlights, as workers toiled under a second extension granted Castagna Construction, which missed the June deadline to complete the job begun in June 2010.

"The building was always dark," said Jefferson, an Arlington native who has has been on the force 28 years and has been chief since 2008. Now light streams throughout.

On the ground floor is a large OSHA-required shower for firefighters involved in hazardous spills, which, the chief admits, do not occur that often.

On the right side is the "trick room," a small office where fire calls are received. Previously more cramped and conventionally wired, the space remains a tight fit but is now wireless.

Jefferson stood in the narrow space and lifted from a box a restored fire horn. "I'm a scammer," he said, smiling at his Yankee penchant for saving a buck.

He told the story of two such fire horns, once inoperable and green with age, taken from Highland's cupola.

He found a restorer in Brockton who would do the job for $450 apiece. Because the guy was a firefighter buff, Jefferson was able to make a trade for old fire gear and get the restoration for free.

In the gear room, hangers for firefighters' heavy clothing and equipment are open to the air, not in closed lockers.

Out back are a new entrance and no hose tower, as there had been since Patriots Day 1929, when Highland was dedicated. Old cotton hoses needed to be hung to dry off, Jefferson explained. Enclosed, they sometimes didn't. Hoses now are made of different material, which don’t need a tower.

A new emergency generator runs on natural gas, not diesel, as is the case at the Park Circle Station.

On the right side of the building is a restored door from the original Highland, one of a number of such touches included by project architect Jeff Shaw, of Donham & Sweeney of Boston. Jefferson made a point of praising Shaw's attention to historical detail. Donham & Sweeney also designed two stations in Belmont.

Upstairs, what was once a dorm at the top of a spiral staircase has become a shift commander's room with more conventional stairs.

Because a firefighter's life means lengthy shifts, sleeping quarters have long been part of the station. Dorms once accommodated three or four in a room; now quarters are separate, because not all firefighters are men. Separate bathrooms reflect that fact, too.

Jefferson said Arlington has one female firefighter among 76 budgeted for the force.

Long days and nights waiting for a call mean kitchen and dining facilities. The new cooking and eating area has a number of ceiling windows, including the Gott skylight, which bathe a cherry table and chairs in welcoming, natural illumination.

For cooking and food storage, high-end appliances include a Viking stainless-steel stove and two Sub-Zero refrigerators.

Helping to pay for the Highland project was $120,000 left over from improvements to the Park Circle Station, which, opened in 2007.

As the work at Highland winds down, $1.3 million improvements to the Central Fire Station in the Center continue. That work involves repair of the exterior envelope to prevent interior decay. Windows and the roof were replaced; brick repointed.

Before, you "needed buckets on the kitchen table" to catch the leaks at Central, Jefferson said.

Apart from work done by contractors, he cited ongoing repair work over the years by town firefighters.

Richard Duffy, well informed about Arlington history, noted that Central Station began construction in 1925 and was dedicated and put into use the next year.

Construction of Highland Hose House began in 1928 and was dedicated the next spring. (The Fire Department has a photo on the town website showing a station of that name in 1875.)  Although the station named in memory of former Chief Gott, it did not become commonly known as the "Gott Station."

The architect of Highland and Central was George Ernest Robinson of Belmont. Duffy called him "arguably ... the premier fire station designer of the era." The Highland station was directly inspired by Boston's Old State House, he wrote.

Improvement to living conditions will be welcome. During the upgrades at both stations, three vehicles have been kept at the DPW garage on Grove Street. Instead of having the town rent a mobile home, as was done during the Park Circle, at $1,400 a month, Jefferson exercised some more ingenuity and bought one for $15,000.

Three Highland firefighters per shift have been housed at the mobile home. The other three or four have stayed at Central.

Once the new Highland opens, Chief Jefferson expects to remain based at Community Safety. He would like to be closer to his force, but Highland and Central are not handicap-accessible, and the building upgrades do not fall under the American with Disabilities Act.

Highland is likely to open Sept. 1. It is closed for 10 days in early August, as testing under the LEED designation checks such issues as air quality.