UPDATED, Oct. 6: A fire that struck two East Arlington businesses early Aug. 28 has caused damage totaling $65,000 according to a preliminary estimate, which is likely to go higher.

Deputy Chief James L. Bailey Jr. told YourArlington that the cause of the 3:38 a.m. alarm at Thrive Juice Cafe is under investigation. Damages extend to next door, at 13Forest art gallery, where workers Saturday were removing art work to a truck. Both are closed.

Thrive owner Derek Fleming looked resigned as he sat at a table in front of the blackened interior of his business, which opened in May 2018. "It will be a long haul," he said. 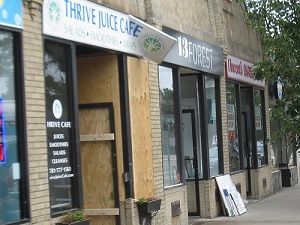 Both businesses had water and smoke damage. There were no injuries to civilians.

Preliminarily, the estimated structural damage to the building is $25,000 and to the contents of Thrive is $40,000.

"The AFD cannot determine damage to the art works in 13Forest," Bailey wrote. "All efforts were made by on scene personnel to save and preserve the artwork.

"Gallery operators were thankful for efforts and believe minimal damage was sustained."

All Arlington companies were on scene for the working fire. Equipment included three engines, one ladder truck, one ambulance and a command vehicle.

Fleming reached out on social media Aug. 28: "We have plenty of fresh produce safely stored that we don't want to go to waste, and we want to invite you all to come buy to grab or donate."

"Early in the morning of Saturday, August 28, there was a fire at Thrive Café next door to the gallery. While the fire did not enter our space, we have suffered water and smoke damage inside the gallery.

"We are so grateful to the Arlington Fire Department, who put out the fire quickly; to their great credit, the firefighters entered the gallery and moved our artwork out of harm's way, preventing much more extensive damage. We were very lucky that no one was injured, and that damage to the artwork seems minimal so far; however, we will need to remain closed for the foreseeable future until our space can be repaired and treated for smoke exposure ....

"Through this challenging past year and a half we have been overwhelmed by your support for our gallery and our artists. We are so grateful to have been able to keep bringing art to the Boston community in these difficult times.

"With this new challenge ahead of us, we hope we can continue to count on your support. Although we are deeply saddened by this event and its effects on our artists, we are highly motivated to keep the gallery running virtually, and to re-open our physical space as soon as possible. As we learn more about what it will take to re-open in the next few weeks, we will keep you updated with new developments.

"At 13Forest we are deeply passionate about our mission to showcase the best artists that New England has to offer, and we hope to get back to doing that in person as soon as we can."

Police report the following about the fire: About 3:35 a.m. Aug. 28, an officer was dispatched to Thrive, at 169 Mass. Ave., to investigate a fire alarm. Two other officers assisted.

The officer arriving saw front right section of the building to be engulfed in flames and smoke. He positioned his cruiser at Marathon Street to block traffic, while another officer deployed her cruiser fire extinguisher, as did another officer.

Police directed extinguishers into the front wall vent unit and through cracks in the window onto the fire base area. The fire had largely dissipated by then but observable items on the rear shelf of the wall appeared to be actively burning. The fire then began crawling up the wall toward the ceiling.

At this point, the entire front glass pane shattered and collapsed, and the Fire Department arrived.

AFD personnel were able to extinguish the fire but not before it destroyed the right front portion of the building. The fire also made its way through the ceiling and continued approximately 5 feet over into 13Forest Art Studio at 167A Mass. Ave.

AFD was able to salvage art from the walls of 13Forest and move it to a safer location before removing the ceiling panels and extinguishing the fire overhead. The entirety of the front portion of Thrive Juice Bar was destroyed by fire, and 13Forest sustained water and ceiling damage.

Police spoke with the reporting party, who said he was on his way home when he witnessed the fire and contacted 911 right away.

The owners of Thrive and 13Forest arrived. The latter said he would attempt to remove the artwork from the building when the AFD completed its investigation.

All doors belonging to the businesses in the area spanning from 167 Mass. Ave. to 173 Mass. Ave. were all Ieft open for the time being for ventilation.

This news summary was published Saturday, Aug. 28, 2021, and updated Aug. 29, to add fund-raising link, as well as after that to reflect totals as well as a police report. Updated Sept. 2 to add 13Forest statement, and on Oct. 6, to update total raised plus fund-raiser.