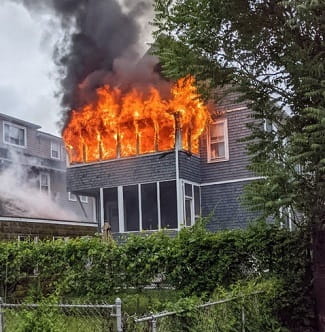 A blaze started by improper disposal of a cigarette destroyed a two-family home at 30-32 Egerton St., on Saturday, May 29, displacing five people, including the family of Bobby Noviello, Gibbs School head custodian.

Fire Chief Kevin Kelley reported the cause Monday, June 7, in response to a query from YourArlington. He offered no comment, but later that day, a Fire Department report spelled out some details.

The report increased the estimated damage to the East Arlington home to $700,000, from the $600,000 reported earlier. Four adults and one child were displaced. No one was injured.

Here is a summary from the report about the 4:07 p.m. initial fire call, with first units arriving five minutes later. Providing it was Capt. Martin Conroy.

"On arrival, all crews still working on interior. Shortly after crews pulled out of building and switched to exterior attack.

"Fire was through the roof and rear porches where gone. Fire pattern showed that the area of origin was the rear of the house at the porches.

"1st 911 called was received from 25 Melrose ... who informed dispatch that the house behind them was on fire .... [The fire investigator] spoke with the owners of the property who stated that approximately 15 minutes prior to smelling smoke he was smoking on the back 2nd floor enclosed porch.

"Owner stated when he finish his cigarette he put it out in an ashtray and went inside. While on the porch smoking he did not notice after smoke of flames at rear of house. His wife was inside on the couch.

"He attempted to through a bucket of water on flames then retreated back inside, leaving kitchen door open, to get his dog and wife and they all exited the house. At the same time he smelled smoke and was looking into source, the neighbor from 25 Egerton Rd ... was knocking on their door to alert them."

The narrative concludes without introduction: "Fire was caused by careless disposal of smoking material."

That Saturday was cool, with a high of 53 and a low of 47. Late-afternoon activities diverted residents on a day that Gov. Baker had declared an overall end to pandemic restrictions, after 15 closed-in months.

After first call about a fire at 30 Egerton, units arrived at at 4:12 p.m. The official report tells how E1 fought the blaze:

Dispatched to a structure fire with more than a dozen calls to dispatch, "E1 arrived on scene and found heavy fire coming from the C side [rear] of the building. The back porch was engulfed in heavy fire."

It may have been at this point that Milton Street resident Laura Bagnall got her dramatic shot of the back porch.

As smoke billowed, Suzanne Leone Lindner could see it from her window on Winter Street.

Steve Morgan could see it rising as he walked on the bikeway near Thorndike Field. He headed over to the site. He fired off a first-notice email to YourArlington.

The Fire Department report offers details: "E1 grabbed a dry line of 1 3/4 and brought it down the driveway and left it there. E1 grabbed another 1 3/4 and entered the building making our way to the second floor."

Met with heavy smoke, fire and extreme heat, "E1 battled the fire on the second floor advancing the line about 15 feet to the living room. Unable to make our way to the back of the house, and with our low air indicators going off, E1 backed out of the second floor and swapped out our tanks.

"E1 entered the building a second time and continued to attack the fire on the second floor still met with heavy heat, smoke and fire. As our low air indicators were going off again, E1 backed out to swap bottles and rehab. At this point the fire attack went from a Offensive operation to a Defensive operation.

"E1 grabbed a blitz gun and attacked the A side [front] of the building from the street. Once the majority of the fire was knocked down, E1 went back into the structure for overhaul and extinguishment of hot spots. Once it was determined that overhaul and extinguishment of hot spots were complete, E1 broke down the lines and made the Engine back up. E1 returned to service after all bottles filled and equipment was properly back on the truck."

Immediately after the fire, Alexa Arsenault organized a GoFundMe campaign, writing, "Please consider donating to my best friend and her family who just lost their home in a house fire. Anything helps!" That campaign had raised $22,475 by June 8, beyond its $20,000 goal.

Gina Furtado reported May 30, that the three-alarm fire struck the home of Noviello. "Everyone got out safely, but the home is a complete loss," she wrote to the Arlington email list. "Bobby and his family are staying with family right now but they have lost everything. Funds are being collected to help the family with this horrific loss. No amount is too small. To donate please do one of the following:

"2. Send a check to Kelly O'Keefe at Gibbs School.

"3. Place Cash in an envelope and leave it in my mailbox. I'd like to present the family with our donation as soon as possible."