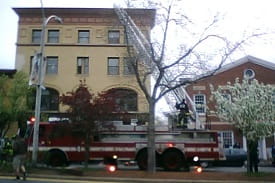 The cause is under investigation but appears to have started in the kitchen, where there was major fire damage, with smoke damage throughout, and it appears to be a total loss, he said. The town website published Chief Kelley's account >>

Juhan Sonin, owner of GoInvo, a digital design studio above Thai Moon, said he saw the smoke billowing into his business. "I knew it was not an electrical fire," he said in a telephone interview.

Downstairs, he saw Thai Moon staff, who told him it was a kitchen fire. He was told no one was hurt.

Sonin had high praise for Arlington firefighters, who he said were "apologetic" because they had to knock down walls to stem the fire's spread. They were "phenomenal, excellent," he said, keeping other buildings from "going up in flames."

The studio that addresses health-care issues has been at 661 Mass. Ave. for 12 years. Thai Moon has been in town 16 years.

There were two alarms, with assistance from Cambridge, Medford, Belmont and Winchester.

The call came in at 9:44 a.m., and the main body of the fire was knocked down quickly.

A GoFundMe site has been established to support Thai Moon >>

Visit the Robbins Library from 2 to 5 p.m. Sundays from October through May. Sunday openings began Oct 10. Find all library hours at https://www.robbinslibrary.org/#