UPDATED, Feb. 6: Members of the state Fire Marshal's Office met with town investigators Wednesday, Feb. 5, to discuss the cause of a two-alarm fire in an East Arlington garage the afternoon before, shown in the Arlington Fire Department photo below. 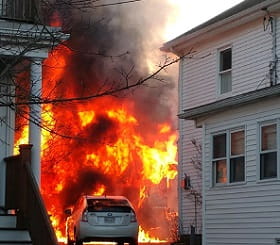 Deputy Chief Ryan Melly reported the alarm for 12 Bowdoin St. came in at 4:25 p.m., went to a second alarm, and the street was closed.

Fire crews from Medford, Somerville and Cambridge responded to the scene, Patch reported. No injuries were reported.

The next day, a second working fire was reported at 5:44 p.m. at the house at 12 Bowdoin, Melly wrote Feb. 6. "Everything is still under investigation at this time, but no injuries were reported on scene," he wrote.

Town resident Steve Morgan wrote that he was on Tufts Street next to the Gibbs School when he took one of two photos he provided.

"I'm told there was probably gasoline in the garage and people could hear it 'popping,'" he wrote.

The high-arching black smoke from the blaze was also caught in a shot from Arlington Center resident Lori Kenshaft.