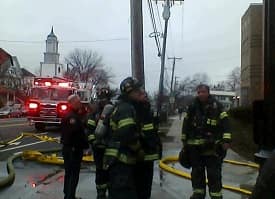 The "flash" of an unknown substance during cooking on the stove led to a fire at the Minuteman Tower Apartments, at 285 Mass. Ave., East Arlington, on Tuesday afternoon, April 9, and a resident suffered burns to both his hands.

Fire Department Deputy Kevin Kelley told YourArlington that one family has been displaced. Her wrote that the burns occurred when a grandfather attempted to extinguish the fire.

"On arrival, crews found heavy smoke and extinguished the fire," he wrote. "Family will have to find other accommodations until the apartment is cleaned up."

Laura Kiesel, a resident of an apartment nearby, says the fire started around 4 p.m. "When I got there, it was already underway and the firetrucks were just pulling up to the front of the building. The smoke was pretty bad."

Kiesel, who stopped by to take care of a friend's cat, who is sick commented by email: "It was scary. ... and when I got there, people were running out of the building, with younger folks helping elderly and disabled people out.

"I ran in there to try to get the cat out, but he wouldn't come out from under the couch, and I couldn't reach him, and the smell of smoke got overwhelming (the apartment is almost right above where the fire started), so I left and left the door open for the cat in case he needed to escape and stayed outside and watched everything.

"I know the EMTs were briefly treating a little boy, and he was OK. The firefighters put a hose into the second-floor main window and went in their with masks and axes and making sure everyone was out of the building by then (which it seemed they were).

"I mentioned the cat and they checked on the apartment and opened the windows for him and assured me he was OK when they came out. It took about an 45 minutes to an hour maybe till we were allowed back inside."