'Bejazzled' brings them all back home

In 2003, Sabato "Tino" D’Agostino, now AHS director of instrumental music, first conceived of "Bejazzled" as an opportunity for the AHS Jazz Band to celebrate the end of the school year. In an effort to keep in touch with his former students, D’Agostino invited all jazz-band alumni to those festivities, and 14 of them showed up.

Fast-forward 13 years, and the event has morphed into a reunion of gigantic proportions that ends with more than 100 musicians onstage, all wailing away at "Watermelon Man," the perennial finale. Duke Ellington once said, "It don’t mean a thing if it ain’t got that swing," and whether the music is funk, contemporary, bebop, Big Band or Latin, it's love of jazz that unites these performers.

For Bennett Parsons (2014), coming home to Arlington didn’t involve much travel. He just completed his second year in the Harvard-New England Conservatory dual-degree program, studying music, math and computer science. In addition to other repertoire, he played the alto sax solo in "Play That Funky Music," which he performed with the AHS Jazz Band at the Berklee High School Jazz Festival competition in 2014, when they came in second (by one point).

In 2013, Parsons performed at the same competition with the AHS Jazz Octet, which took first-place honors. He remembers both events as highlights of his high-school career, along with the 2014 AHS Jazz Band trip to Italy. "Bejazzled underscores the fact that our jazz-band experience extends beyond the four years we spend at AHS," Parsons noted.

Originally a clarinetist, junior Noah Milstein changed instruments so that he could join the jazz band, and he remembers being influenced by Parsons. "After I went to 'Bejazzled,'" Milstein said, "I wanted to play the baritone and alto sax, and when I saw Bennett playing high notes, I started practicing high notes. At 'Bejazzled,' I'll be performing alongside people who inspired me in the past." 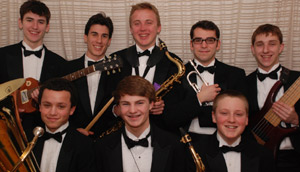 Milstein is not the only AHS Jazz Band member for whom "Bejazzled" was inspirational. Trombonist Amy Cunniff performed in the concert as an eighth grader with the OMS Jazz Band directed by Paula Demetrio. Now an AHS sophomore, Cunniff recalled that "the high school band had this incredible presence. I wanted to be part of something like that, and I aspired to be in the AHS Jazz Band at some point."

For sophomore pianist and vibraphone player Nathaniel Heitman, the value of "Bejazzled" is that "it brings all the generations of jazz-band members together, and we get to see members of jazz bands past."

Proving that point is junior trumpet player Peter Travassos, the only AHS Jazz Band member who will be performing with two of his siblings -- younger brother, Mark, a member of the OMS Jazz band, and older brother, Alex (2012).

A 'window' on history, influence

"'Bejazzled' is a window into the history of the AHS Jazz Band and Tino D'Agostino's influence on music in Arlington," said junior trombonist Chris Madden.

Jack Libresco (2015) agreed. "I’m so thankful to have had Mr. D. as a teacher," said Libresco, a trumpet player who is attending Macalester College in St. Paul, Minn., where he’s majoring in classics and art history, with a possible minor in music. "In addition to inspiring me daily with his gargantuan knowledge and talent," Libresco noted, "Mr. D. gave me the technical skills to function in a professional-level group. I think I would go so far as to say that Mr. D. taught me what rhythm is."

For his part, D’Agostino is pleased, if a bit surprised, that "Bejazzled" has become such a highly anticipated event. When the lights go down in Lowe Auditorium on the night of June 10, it will be time, once again, for the AHS and OMS Jazz Bands, along with alumni from near and far, to inspire a new generation of Arlington jazz musicians.

Tickets available via email, by phone, at the door, or at MKtix.com. Donation: $10.

ALUMNI PARTICIPATING (as of June 10)

This story was published Monday, April 18, 2016, as an announcement and updated June 9, to lead with a feature by Carla DeFord quoting numerous alumni.

On June 12, Sabatino wrote to supporters: "I would like to thank you for coming last night and show your support. I am sure you have noticed the joy and passion that those young musicians show on stage(from 11 to 33 years old). I am so proud of all of them. Therefore, your presence at the concert made that night even more special and unique."