"The invigorating and soaring music shows why music is food for the soul."

That's how Ronald Haroutunian of Arlington describes the parts he plays in "The Fall of the House of Usher," a new film of an opera by Phillip Glass, produced by Boston Lyric Opera exclusively for its streaming service, Operabox.tv. The genre-breaking film mixes hand-drawn animation with stop-motion animation alongside curated archival footage.

The parts that Haroutunian plays are on the bassoon. The sounds from the double-reed instrument supports the story's dramatic effects. Drawing you in, he says, are feelings of melancholy, mystery, sinister foreboding, dreaminess.

"Usually composers use the bassoon for comic relief, but I did not hear much of that in the opera," Haroutunian wrote in response to questions from YourArlington.

Coronavirus restrictions forced an unusual recording process, he wrote. The BLO Orchestra and singers recorded the score safely under Music Director David Angus, who monitored the session remotely from his home in England.

"This is an unusual creative time for Boston Lyric Opera," Esther Nelson, BLO's Stanford Calderwood General and artistic director, said in a statement. "This pandemic has demonstrated how inventive artists respond with ingenuity to a crisis."

The Arlington bassoonist described the "voice" of his instrument: It is "vocal in nature, so it also doubles the tenor voice occasionally, not intruding on the voice, but just gently reinforcing the line. The bassoon writing also has rhythmic pulse to give energy to the dramatic shifts in the opera." 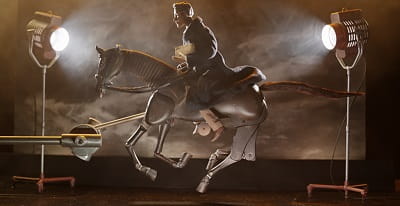 In an example of the film's animation, William rides to the Usher house. / Operabox.tv

Haroutunian gives a nod to the Glass composing style -- minimalist -- "so there is quite a bit of repetition, which can create a mesmerizing effect, but it is quite exhausting to play -- especially as the bassoon is a wind instrument, and breathing can be an issue."

As a member of the Boston Lyric Opera Orchestra last fall, he received notice that opera was planning to do an online production of "Usher." The score called for a small-instrument ensemble, which included bassoon. He accepted the offer, and all were tested for Covid two days before recording at 'GBH studios.

The score was recorded in two days of six-hour sessions, without the singers, who were recorded later.

Recording the film's score during Covid-19 took invention: "We musicians had not performed for seven months .... Needless to say, we were all excited and pleased to be performing the music."

The 65-year-old grew up in town, a product of the public schools here. He was 13, at Arlington Junior High East, when he started bassoon. "The music program was very strong, and as I knew I wanted to pursue a music career, I was able to to take other music courses in high school," he wrote. He also performed in District and All-State music ensembles, as well as Massachusetts Youth Wind Ensemble and the Boston Youth Symphony.

He attended New England Conservatory and did graduate work at Boston University in music. He studied his instrument with the Boston Symphony bassoonists at that time, Matthew Ruggiero and Sherman Walt.

He has been a professional bassoonist since 1977. He has performed with many groups, in the Boston area and New England.

He performs with the Boston Modern Orchestra Project, Odyssey Opera, Pro Arte Chamber Orchestra; and Bach, Beethoven & Brahms Society. He teaches bassoon at several colleges and universities in the area. He is also in the orchestra of various choral groups and chamber ensembles.

"I am fortunate to be busy with my career, at least until Covid appeared," he wrote. "Now most ensembles are quiet until phase 4."

He has performed Glass before -- last February the opera "Akhnaten," with the Boston Ballet.

"I thought the production of 'Usher' was very well done," he wrote, "and the BLO is one of the jewels in the Boston cultural scene."