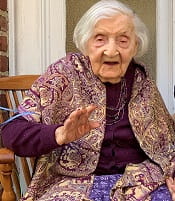 The complexities of Town Meeting, virtual or not, have fallen silent as a special session ended Dec. 2. Welcome the simple celebration of Diamond Chamallas, honored at age 106 as the town's eldest resident.

A Select Board proclamation Monday, Dec. 7, provided the honors. The lively resident, who still lives at home, dished up the humor.

"If you have a chance to write down secrets that got you to 106, please do," board member Len Diggins said.

Chamallas responded indirectly: "I would say I am kind of worth it."

She also drew laughter after member Steve DeCourcey thanked her, noting her accomplishment as valedictorian of her graduating class at Lowell High School.

Flanked by a masked niece and nephew, the 106-year-old listened as board Chair John Hurd read the proclamation.

At its conclusion, family members and officials applauded. "Thank you very much for this honor," she said. "I love doing things for my family, but I was unlucky to lose them.

"Moving to approve the honor, member Diane Mahon said, "You look like a very beautiful lady to me."

Chamallas responded: "I was a hard-working little girl when I came here, and everything my family asked of me, I did."

She was born just after World War I began, on Nov. 7, 1914, in Lowell, to Stanley and Florence Tsamolas, the original Greek spelling of her surname. They had immigrated from Lagadia, a mountain village in Peloponnese, Greece.

When Diamond and her six siblings started attending school, which would have been just following the Spanish Flu pandemic, the spelling of their last name was modernized to Chamallas for ease in pronunciation.

Despite being valedictorian, hard times meant she was not able to pursue a college degree, as she would have liked. Following World War II, her brothers George and Chris came to Arlington after buying Martin’s Diner on Mass. Ave. in Arlington Center, and the other siblings followed.

Diamond worked as a sales associate at Touraine’s, a ladies' clothing store on Mass. Ave. in Arlington. In Diamond's younger years, she always enjoyed singing at the Greek Church, dancing at the Commodore Ballroom in Lowell and participating in the Young Democratic Party.

In the late 1950s, her brothers sold Martin’s Diner and purchased Kendall Diner in Cambridge, partnering with their other two brothers, Alex and Nick. There, Diamond became the hostess/waitress, and her sister Catherine a waitress.

In 1960, Diamond with her two remaining single siblings, Alex and Catherine, constructed a house that Diamond designed in what was then a new development called Poet’s Corner. Diamond has lived there for the past 60 years.

She loved decorating her house and used to work in her yard cutting grass and trimming bushes until her late 90s.

On her 106th birthday, in November Covid-19 changed the day. Instead of a traditional party, a festive drive-by parade was held.

The board voted, 5-0, to proclaim Nov. 7 Diamond Chamallas Day in the town.