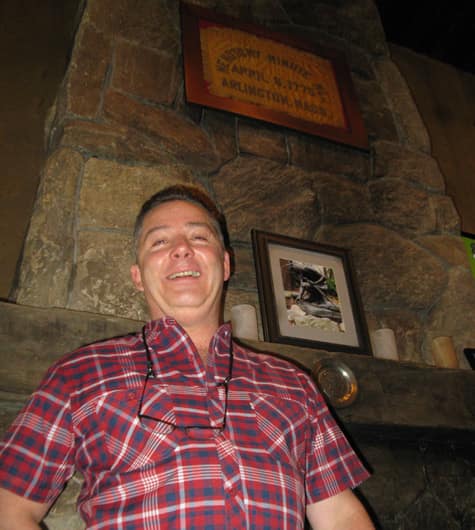 For Billy Lyons, the love of history goes back to the chip on his shoulder in eighth grade. The managing partner of the Menotomy Grill & Tavern remembers how Lexington and Concord always got the Revolutionary War ink.

"We got erased" from the history books, he said in an interview that ranged over his extensive business career, which included stops at the House of Blues in four cities. As a youngster, the Arlington native remembers how impressed he felt seeing firsthand the holes in the walls at the Jason Russell House from shots fired during the Revolution.

In 1971, when he was 12, he recalls discussion in town to change its name to "Menotomy." The politicking around that issue spawned reenactors, including the Menotomy Minute Men. The group's distinctive flag is among the testimonials to Arlington history that grace the walls of the Menotomy Grill.

As we talked in a corner on a relatively quiet August afternoon, emblazoned above day barkeep Mark Hannon (and 5-percent partner) is this legend in distinctive, contrasting lettering: "West Cambridge Incorporated 1807, renamed Arlington in 1867."

At 57, Lyons knows how to make a restaurant prosper, so how does all of that required attention to time-consuming details -- the food, the brews, the staff -- leave hours in the day for local history?

He makes the time; it's just part of who Lyons is. Even so, he makes clear: He does not want his pub to "exploit history."

He joined the Arlington Historical Society about seven years ago. He notes his interest in town history long predates opening the grill.

Later, the society asked him to be a board member, a request he regards as an "honor." He says it "legitimizes what I'm doing," adding, "You have to make history exciting for 28-year-olds."

Supporting that legitimacy was the call to have the grill cater the 2015 Dallin Museum fund-raiser that raised $10,000 during the unveiling of Dallin's "On the Warpath" as its restorer, Dr. Daniel J. Fairbanks, discussed his process for reassembling its nine pieces. That "means a lot to me," he said.

In addition, his long connection to A-TED (Arlington Tourism and Economic Development), makes perfect sense: The grill, at the town's eastern gateway, has created 54 jobs.

To run a restaurant, "you have to be smart," he says, and he brings those smarts to merging business and history.

Speaking of both, look back a quarter century. On the spot where the grill has been burnishing its reputation, a McDonald's was once proposed.

But the national fast-food venue was not to land here. Residents led by the East Arlington Good Neighbor Committee, fearing paper and human refuse, helped persuade town officials to keep it out.

That decision, sensible at the time, made it tough for a potential restaurant after Hollywood Video closed in 2008. Lyons said he and others unsnarled four years of red tape, including a restaurant restriction, to maneuver from business plan to opening. A $2.6 million U.S. Small Business Administration loan helped the partners push ahead.

Lyons calls the grill profitable -- after monthly payments to his investors (he is a 20-percent owner). He beams -- "passionately proud" -- about this fact: Instead of declining, his food sales have increased to 61 percent of overall revenues.

The trend for pubs that he has seen over the years is to sell more drinks and slowly turn into a bar. Experience has taught him to escape that slippery slope.

That is one reason he makes sure to credit his chefs: Mark Thompson, who was in charge of cuisine at Chez Henri in Harvard Square for seven years, and Greg Boschetti, an Arlington native.

At the same time, he brings out the grill's latest menu. Its drink list includes Thompson Run. That's dark rum, hard cider, cranberry ... and Moxie, the 1880s soft drink produced by the father of the man for whom Arlington's Thompson School is named.

Follow these twists and turns in Lyons' personal history

Billy Lyons was born on Hillside Avenue and went to the old Brackett School. At Arlington High, he played right wing for three years under legendary hockey coach Ed Burns.

"It may sound corny," he allowed, but "playing team sports helped me succeed in life." Running a restaurant is a daily "battle," he said, and winning means knowing how to help the team.

In addition, he attributes his success to the impact of his mother. Not college-educated, she retained an attitude that was accepting, not judgmental. An administrator in nursing homes, she accepted all kinds of people into her home. Race or orientation made no difference.

The history lesson about the bar at the Menotomy Grill & Tavern.

Accomplishments came after a long and winding road. Here's a brief history:

Following high school, Lyons went to Colorado, worked on a railroad and then a steel gang.

Returning to the area in the late 1970s, he attended St. Anselm College in New Hampshire, but after having hung out with hippies in Colorado, he found it too strict and moved to Wyoming, facing the dangers of working on oil and gas rigs.

Back in the Boston area, he began his restaurant experience at the bottom, as a bar-back, or a setup man at Lily's Piano Bar, at Faneuil Hall, where his reputation as a bartender rose.

Viewed as a "hired gun" around the bar, he was speedy with drinks and patter. He learned he was good at managing people. As a bar man at the Boston Sail Loft, he blossomed.

For the first House of Blues, in Cambridge, 500 potential barkeeps were interviewed, and Lyons was among 13 hired. At 96 Winthrop St., in a structure built in 1635, the year the village that became Arlington was founded, the music venue opened on Thanksgiving 1992.

Partners included Dan Aykroyd, who performed in the 1980 film "The Blues Brothers"; Isaac Tigrett, who opened the first Hard Rock Cafe in London, in 1971; and Boston nightclub mogul Patrick Lyons (no relation).

At the spot near Harvard Square, Lyons was promoted to management and became "company historian," which recurred at a number of his positions.

From 1993 to '96, he helped open House of Blues in New Orleans, followed by a stint at the Atlanta venue, which opened for the Olympics, lost $7 million and Tigrett was shown the door. Lyons made his way to Chicago, to yet another House of Blues. Characteristically straightforward, he says he was "used," fired and came home.

Positions at Not Your Average Joe's in Watertown and Randolph showed what he calls "a good concept" -- selling much pizza pays for fancier menu fare and helped him gain a reputation as someone you hire to open a restaurant, who becomes a general manager and perhaps an owner.

He then launched independents, include Firefly's, a barbecue spot in Framingham that is now closed but open in Marlborough. There, he learned to barbecue, experience he brought to Menotomy Grill, which has a smoker.

After that, he managed Summer Shack in Back Bay, and one he emphasizes, Stoddard's Fine Food & Ale, Temple Street, near the Park Avenue T, where he "created a gastropub culture" in a historic location that survived the 1872 Boston fire.

Closer to home, in Winchester, he opened the Black Horse Tavern, http://www.blackhorsetavern.com/Home in 2010.

Finally, in 2013, his local-history dream came true, as the grill at Arlington's eastern gateway welcomed the public.

The blues sing on there, Thursday nights, starting at 9.