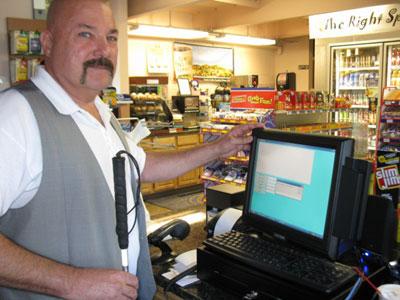 The owner/manager of The Right Stop, the just-opened convenience store at the MBTA depot in the Heights, is surely making a little history in Arlington.

With just 10 percent of his sight, lost in a building accident a decade ago, he is in charge of what he says is the first store to open under a state program aimed at aiding the disabled.

"I asked for this space," the 59-year-old said in an interview Aug. 12, referring to what he calls a "pilot" for the small-business enterprise program of the Mass. Commission for the Blind.  "I'm doing this on my own."

A man with a mission beyond selling soft drinks and chips, Foreman said he hopes to address "the bigger picture for the blind and disabled." For those in labor force left behind, he sees alternative ways to find an "opportunity to get on the economic wheel."

The expected -- and the unexpected

The convenience store is stocked with many of the items you would expect -- including your morning coffee. If you want cigarettes or alcohol, look elsewhere.

Coming are a Charlie Card dispenser and Lottery tickets. 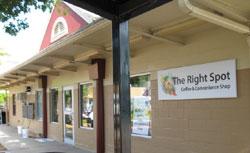 The Right Spot: Fresh paint at the T's depot in the Heights. Another feature that sets the store apart is equipment that helps Foreman with transactions -- a cash register invented by a South Dakota farmer and developed by Scanacan. Scanned products are routed to the register, and the code is digitally translated into audible words.

Foreman's first and this equipment will be recognized at the grand opening, whose date is yet to be set. Foreman said state officials are expected.

Wayne Levy, director of external affairs of the blind commission, wrote Aug. 7 said the agency is "tentatively targeting dates toward the end of August." Foreman said he believed it would occur the second week in September.

An accident a decade ago

Reaching this point has been a long road.

Go back 10 years, when Foreman was a mechanical engineer working in hydraulics ("I built factories"). In a town near Ann Arbor, Mich., he was on the second floor of a building when an Earth tremor led to its collapse.

"Two thousand bricks fell" when he was on a second floor, and he fell 15 feet.

He was paralyzed and in a coma for 10 months, neck crushed. Rehabilitation involved remapping his brain, he said, including relearning how to talk.

Following years of effort to return to the living, Foreman found himself in 2009 looking for a store location to make good on the promise of the Randolph-Shepperd Act. The 1936 law, updated in 1974, expands opportunities for blind vendors. It underlies the small-business enterprise program under which The Right Stop opened.

He signed a lease in 2010, and it has taken three years and overcoming what he calls "27 layers of red tape" to open.

The Wilmington resident delivers kicks of blunt honesty in an accent revealing his native Chicago.

He knows about the mural painted by Dearborn Academy students and dedicated the year he looked at the location for a business.

"I didn't see it. I couldn't," he said, referring to his eyesight.

No one brought the mural to his attention.

Last winter, a contactor reshaping the faded depot mangled the mural. The story is reported here >>

After most of the mural was painted over this summer, Tova Speter, the artist who directed the Dearborn project, said in a July 31 email:

"I requested that the mural be painted over as it was not in good shape once the initial destruction took place. The two small panels might still be there because they are trying to figure out whether they can be removed and salvaged."

The entire mural is now gone. Small pieces of it have been transferred to metal, with the intention of donating them to Dearborn.

Wants to be part of town

"I'm the guy helping people," Foreman said. "I'm going to be a part of this town."

A neighbor has already reached out. For his Aug. 5 opening day, Chuck Pappas of Swifty Printing made his store's signs.

Behind the counter, Joseph A. Doucette, Foreman's nephew, helps out. The 19-year-old Wilmington resident graduated from high school in New Hampshire.

If you're up in the Heights waiting for a bus, stop in and say hello.