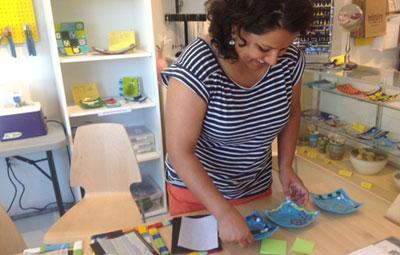 Suchitra Mumford of Arlington has managed Indigo Fire for
about seven months.

Suchitra Mumford’s life and career are made of many parts, like the jewelry and pottery her customers create in her art studio. Mumford, an Arlington resident, opened Indigo Fire in Belmont after thinking about ways she might use her talents as an artist while helping others become more creative.

Mumford, better known as Suchi, had taken her children to pottery studios where she was not happy with the outcome.

There had been no guidance, she said, and her children brought home pieces of pottery that were decorative but she was interested in something more functional.

“I realized the studios didn’t know much about pottery, and I thought we could teach people.”

Her studio offers classes in clay and glass fusion, but customers can also drop in to use the studio on their own.

If you want to glaze pots, there are mugs, bowls and other functional pottery made by staff, ready to be painted. But there are also pottery wheels, tables for hand-building and room to experiment with glass in different shapes and colors to make jewelry or decorative glass patterns.

Clay, says Mumford, offers lot of creative possibilities for people of all ages, both for the senses and the intellect. Children and adults alike enjoy shaping and molding the material, while also figuring out how to solve a problem and make their piece work.

On a recent afternoon, a mother and daughter experimented with glass in different colors and shapes as they made pendants.

Nearby, a clay class for children elicited giggles as the youngsters created hand-built pottery. A variety of pots and mugs and jewelry were spread out on a table, awaiting time in a kiln. The studio is spacious and clean, with plenty of room and time to learn and create.

The mother of two young daughters, Mumford has held a variety of jobs, including as manager, coordinator or consultant for such entities as Earth Watch Institute and the Institute for International Education.

She worked for Wide Horizons, a Waltham adoption agency, for nearly four years as the humanitarian aid coordinator.

Her interest in that field was personal: She was adopted from India at the age of 3, by a couple from Cambridge living in Bombay who had fallen in love with the country’s culture and history.

David Mumford, a renowned mathematician who won the National Medal of Science in 2010, and his wife, Erika, a poet, had three sons by birth and wanted a daughter. When they traveled to an Indian orphanage in the early 1970s, few people were adopting internationally, let alone from India.

What happened next changed Mumford’s life forever. The orphanage brought in a group of 16 little girls, and the couple was asked to choose the child they wanted. Mumford ran to Erika Mumford and hugged her: The choice became a simple one.

Mumford was raised in an intellectual and artistic family. Her stepmother is an artist, an aunt and uncle are artists, one brother is a painter and another is a photographer.

"Art has always been a big part of my life," she said. "I always took art classes at school and started using a wheel at age 7. I took community classes, went to local art studios and almost majored in it in college."

Instead, she earned a degree in management from Antioch College and later a master’s degree in international development from Brandeis.

Her husband, Mark Baranoff, was in the travel business but he, too, reinvented himself, as Mumford puts it, and is now a middle-school math teacher in Natick. The couple’s two daughters are Maya, 10 and Leela, 7.

"It’s a lot of work, but I love it," said Mumford of her new career. "I think I didn’t quite realize how happy it would make me. I’ve never worked so hard and still been so content. Maybe because it’s the range of things we do; no two days are alike."

Thinking back to her 2-year-old self at the orphanage, she said, "a moment like that defines you; you take risks, and that’s what I did here."