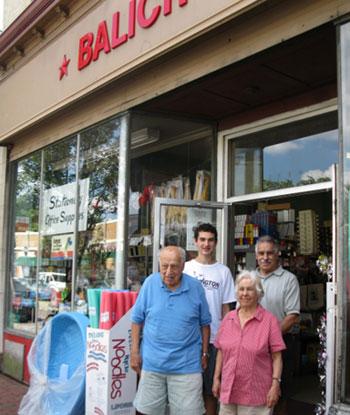 Three Balich generations: Antoun and Gloria stand in
front of Reed and Joseph.

In a town where five other businesses aiming to be all-purpose outlets compete, Balich 5 & 10 persists as the place where, it seems, you really might be able to buy "anything."

The store in the Heights, at 1314 Mass. Ave., has "the biggest selection of rubber chickens in Arlington," says its owner, Joseph A. Balich, 59, with a twinkle in his eye, pointing to the birds hanging in plastic bags above his head.

Celebrating its 40th year in Arlington, Balich carries on with a fast-fading 5-and-10 tradition.

Woolworth's, among the original five-and-dimes, dating from 1879, had a New York City company headquarters that was, in 1913, the tallest structure in the world. The building was recently sold for high-end condos.

Fast-forward to the world of CVS (Arlington has three), Walgreen's (we have two) and Walmarts (none yet). The Heights store has stayed alive since Antoun Balich took over in 1972 from Ralph Hudson, who opened his 5-and-10 in 1954 and had a second spot across from the Capitol Theatre. Joe, after gaining retail experience with CVS, has worked there since 1984.

On a hot Monday in mid-August with a large fan roaring at the back of the store, Balich explained how he stays in business.

"I try to find things you can't find anywhere else," a strategy that leads to loyalty. "I have my own customers," he said.

"They move away; they retire to Florida -- they return to see their children and still come back here."

From Lexington and Medford, they come. A lady from Winthrop shows up once a month, he said.

But how does he keep it going? "It's hard," he said, yet a friendly incident showed how customer loyalty helps. 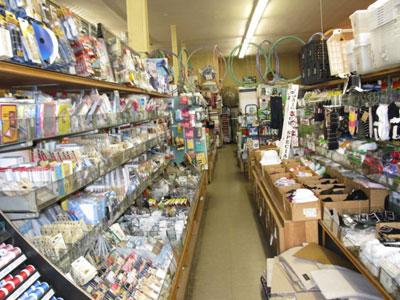 Chaos appears to reign inside Balich 5 & 10, but Joe knows where everything is ....

As a reporter stood in a vacant parking spot in front of the store lining up a photo of four generations of Baliches, a woman pulled up, backing in carefully. She leaped from the car and hugged Antoun, 85.

To go beyond the love, Joe does try to keep up with newer merchandise. Making that more difficult, one of his suppliers, Arrow Wholesale Co., in Worcester, went out of business recently.

To regroup, Balich takes to the Internet, where he can buy in smaller numbers, not Walmart amounts.

Asked why he hangs in there, he said: "I know the business inside and out. I like coming to work."

To illustrate, he led a trip into the past. The route? Treading his store aisles and observing products, many of them displayed in cardboard boxes.

A tour through the aisles

Joe first keeps a toe in the present as he notes his top sellers: toys, house wares, stationery, computer paper and glassware, as some people turn away from plastics.

In decline are photo albums (guess why?) and roach-control products.

Much of Balich's path to the past is leavened with a gentle recognition that hanging on to things may be an unavoidable human trait -- a variation Proust may have appreciated. Consider these:

-- Rug-Sta (Thingamajigs you place under a rug to keep it from moving): "This is old."

-- Bag Balm skin softener: "Put it on your feet after walking."

-- Rubber fingertips: Have trouble picking up sheets of paper?

The tour touched only once on Syria, the elder Baliches' native nation wracked by civil war. Joe, who knows of no current relatives in Damascus, just shook his head.

Balich's 5 & 10 is open Monday through Saturday. Go in. At the counter, you might find Balich's son Reed, 15, or even his parents helping out.