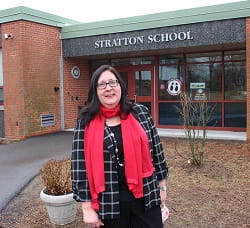 In a poem about his disability, “On His Blindness,” John Milton concludes: "'They also serve who only stand and wait.'” The English poet finds that he has a place in the world despite his inability to see with his eyes.

Susan Soares, a paraprofessional educator based at Stratton School, serves without standing and waiting. She helps students with individual education plans learn how to better see their roads ahead.

She has been named the Education Support Professional of the Year by the Massachusetts Teachers Association (MTA) and will be honored Saturday, April 10, at the virtual 2021 MTA ESP Conference.

Soares is the Unit D representative of the Arlington Education Association (AEA). An MTA news release says her honor is for this reason: During the 2017-18 school year, she led a successful unionization drive for her fellow paraprofessionals, "a classification that includes teaching assistants, behavior support professionals, tutors, librarians and building substitutes, organizing one of the last major nonunion groups of ESPs in Massachusetts. ESP refers to educational-support professionals.

'I was so surprised'

Julianna Keyes, AEA president, told the School Committee on March 25. “This [school] year, we have seen how important these paraprofessionals are.”

Asked about how she feels to receive this award, Soares told YourArlington: "I was so surprised! It was an amazing honor to get, and I had a great team behind me.

"I always felt supported by my colleagues, Jason Levy (AEA) and Phil Katz (MTA), who worked tirelessly alongside me. It was an honor to get recognized for the immense amount of work we've been doing and the impact it has had on the paraprofessionals in Arlington."

Asked about her surprise, she responded: "I thought that I was just doing my job and what I felt was right. The most recognition I expected was the success of getting the paraprofessionals unionized. When I had the chance to help make a positive impact on the lives of paraprofessionals, I was committed to them being respected and valued as educators in the schools."

Supporting her receiving this award were comments from Teresa Spangler,a special-education teaching assistant at the Menotomy Preschool, who wrote, "Susan began to lead the way. She co-chaired the Organizing Committee and reached out across the district to inspire others to take up the cause. Susan found common ground with the Arlington Education Association (AEA) and worked within the association to further the ESPs common goals."

As a special-education paraprofessional, Soares, 58, mostly work to support students throughout the day with their reading, writing, executive functioning and math. She has been at Stratton for 13 years.

She grew up in Massapequa, N.Y., on Long Island, and moved to Boston to go to college.

Soares went to the Art Institute of Boston, now part of Lesley University, studying commercial photography and worked as a freelance photographer in the Boston area for many years before she had children. Once they were older, she went back to work and found her passion working at Stratton in special education.

She has lived in Arlington since 1995 with her husband, John, and her two children, Ziza and Racer.