Time stops, and you’re just all about making something look a certain way. Stephen Sondheim calls it trancing out. You’re right there, in the moment, you have to do it.
-- Kate Matson 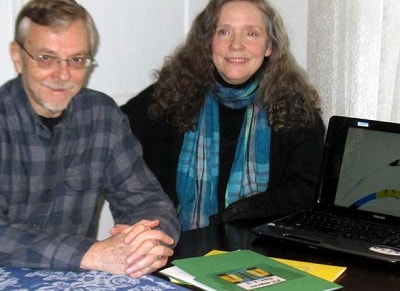 Mark Harvey and Kate Matson at home as the nearby laptop previews the improvisational film. / Bob Sprague photo

For more than 20 years, Arlington couple Kate Matson and Mark Harvey have inspired each other and their audiences with a combination of animated silent film and improvisational live music. Their next “FiLmprov” performance was Friday, Feb. 23, in Cambridge.

“It’s very exciting for me to watch,” Kate says of their shows. “You never know what’s going to happen.”

YourArlington interviewed the couple in their home to learn about their unique collaboration. Both talk about their passions in an unassuming but intensely engaged way.

What is FiLmprov? First, Kate creates a film in which she animates everyday objects --her late father’s oboe reeds may become two-legged characters; a group of spoons may dance in formation across the screen.

Mark, FiLmprov's music director, views the film and creates a cue sheet indicating when each instrument should come in. Next, the musicians watch the film -- just once -- without instruments. At the show, it all comes together in a one-time-only experience.

“Everything we do is spontaneous,” adds Mark. “We’re making it up as we go along.”

But don’t confuse spontaneity with lack of discipline. On the contrary, Mark says. Over the years they’ve worked together, the FiLmprov musicians have become more disciplined: “We know each other’s moves like a basketball team. We have our different roles, but have a lot of freedom within them.”

How Kate got started

Kate’s foray into film began when she worked as a graphic designer several decades ago. “I got a bug to see something moving,” she said simply. She found a Super-8 video camera in the back of a camera store and tried it out.

Mark observes with unabashed admiration that Kate is entirely self-taught in film and animation. Kate views her lack of training as an asset: “Part of the advantage of being uneducated is that you try things.”

This event is presented in conjunction with MIT course 21M.355,  Musical Improvisation, and MIT Music and Theater Arts.


Technology has evolved quickly over the past 22 years. Kate is always on the lookout for different programs, and is always teaching herself new skills.

But she likes her original Super-8 medium best. The name refers to the old Kodak film’s 8mm width. Kate says it enables her to do frame-by-frame animation. The film is chemically developed, which gives it a different look that suits Kate’s artistic vision.

It’s not easy, though; she mails her undeveloped work to California -- to the one place that still develops it -- and hopes it makes the round-trip journey. Once, she said, her film got lost in the mail. It was later found.

Mark teaches music at MIT and has led Aardvark Jazz Orchestra since 1973. He said he begins his music-improvisation class with Kate as his guest and FiLmprov as the topic. Because there is no genre, he said, no one has a leg up on anyone else. It breaks down the walls and makes room for every student to feel that improvisation is possible.

Where do they find inspiration for their boundless creativity?

For Kate, it’s in whatever object grips her at the moment. Old fans that remind her of tutus. Crumpled paper. Each becomes a character in the vivid world of her animation. “Play Time is a huge wonderful source for things to animate,” she says of Arlington’s chock-a-block hobby store.

Some of Kate’s artistic role models are early animators, such as Oskar Fischinger and Norman McLaren, Kate says. She admires the independent spirit and experimental work of these predigital pioneers.

Mark finds inspiration in almost anything, he says -- political, cultural and historical events, and people. He cites the portraiture of jazz great Duke Ellington and modernist Charles Ives as models for his musical portraits.

Kate and Mark cite each other’s work a source of ongoing inspiration.

What advice do they have for others breaking down the barriers to their own creativity?

Mark tells his MIT students to carve out time for music despite a heavy course load. “You literally just have to put the time aside to do it,” he says, even if it’s just half an hour a week. It’s worth it when you find that moment of Zen, they both suggest.

“Without it, you’re not as happy,” Kate observes. “Your life just isn’t quite complete.”

Kate describes her state when she’s deep in an animation project: “Time stops, and you’re just all about making something look a certain way. Stephen Sondheim calls it trancing out. You’re right there, in the moment, you have to do it.”

How you get to that in-the-moment feeling, she suggests, is different for each of us.