INSIDE AHS MUSIC by Carla DeFord 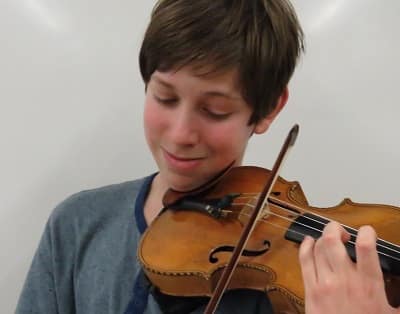 When the winners of the 2018 Boston Youth Symphony Orchestras (BYSO) concerto competition were announced at a rehearsal in November, Arlington High School (AHS) sophomore violinist Liam Barthelmy, who had taken top honors, didn't get the news.

As Barthelmy related the story, he wasn't feeling well, so he left the rehearsal early and didn't find out he had won until the following Monday at AHS when one of his classmates, a fellow BYSO member, told him. Even then, he wasn't ready to spread the word until he got formal notification from the BYSO, which didn't happen until that night or the next day.

"How I found out was actually pretty funny," Barthelmy recalled. "They said, 'And the winner is ….,' and I was not there."

As one of two first-place finishers, Barthelmy was featured in a concert of the BYSO Repertory Orchestra on Sunday, Feb. 11, at the Boston University Tsai Performance Center (see sidebar). He performed the first movement of Felix Mendelssohn's Violin Concerto, the piece with which he won the competition.

Despite his later success, he noted that he entered the contest without great expectations: "I thought it would be cool to try out. Even if I didn't win, it would be a good experience to practice and perfect a piece for a big audition."

Barthelmy said he worked on the Mendelssohn "pretty much exclusively" for weeks and then found a piano accompanist, Miles Goldberg, through his violin teacher, Mark Paxson.

"I actually did not feel that I played my best at the audition because I was really nervous," he remembered, "and I rarely get nervous before auditions because I love performing, but for this one, I was almost shaking. Maybe it was because I was hyperfocused on what I messed up. Although Mr. Goldberg thought I did well, I did not think I was going to win, but I'm often pessimistic about these things."

One thing he's not pessimistic about is the Mendelssohn itself. "It's a really amazing piece," Barthelmy noted, "with some beautiful melodies. It includes super-hard passage work where you're playing on two strings in octaves, and it’s very hard to get those in tune. I maintain that the most difficult part of the piece is actually the first page. Even though it looks relatively easy, that opening melody has to be perfect because that's the way you draw the audience in."

Coming from what he described as "a fairly musical family," Barthelmy started playing the piano at a young age. Although he still takes piano lessons, he said it is "more of a casual thing. Violin is more serious for me because I play it in several orchestras and chamber groups. I also compose music, and the piano is a great asset for that."

At the AHS Winter Concert the honors orchestra played his Quartet in C Major, which he not only wrote, but also arranged and directed.

A member of both the AHS Honors and Symphony Orchestras, Barthelmy credited AHS music director, Sabato ("Tino") D'Agostino, with introducing him to musical genres he wasn't previously familiar with, such as pop and jazz. A case in point is Barthelmy's participation in the pit orchestra of last year's AHS musical, Crazy for You, which featured a swinging score by George Gershwin.

"I really enjoyed that. The challenges are not the same as with classical music. It's all about timing, with lots of key changes, crazy rhythms and trying to coordinate with the actors," Barthelmy said.

Last summer, Barthelmy had what he called "an amazing experience" at Arts Vesuviana, the music and art camp in San Marco di Castellabate, Italy, founded by D'Agostino. On Feb. 15, he'll head back to Europe with the AHS Honors Orchestra, Jazz Band and Madrigal Singers for a concert tour of Switzerland and northern Italy led by D'Agostino and choral director Madalyn Kitchen. That follows the Feb. 9 farewell concert.

Barthelmy noted that his plans are still a bit uncertain: "My dream job would be composing, and since I really like math and science, I'm not sure a conservatory would be right for me. I certainly will look for a college with a good music program. Even though I'm not sure I want to make a career of being a performer, I'm not going to stop playing the violin."