Aileen Maroney, a YourArlington freelancer who provides words and some photos, tracked down George Papadopoulos, creator of a dance group that comes together regular at St. Athanasius Church. See the dancers at the Greek Festival June 1 through 4. 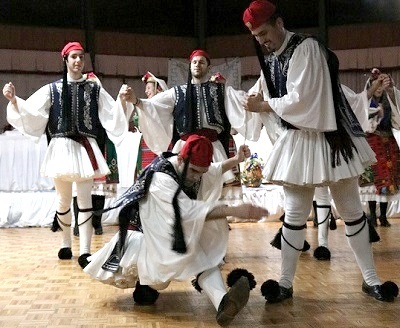 On a recent Monday, the St. Athanasius Church resounded with the ancient thrum of Greek melody as the Sons and Daughters of Alexander the Great Greek Dance Group practiced steps for the Arlington Greek Festival.

As nimble feet whirred in a semicircular pattern, the dance troupe’s creator and director George Papadopoulos, at age 77, observed the movement approvingly and explained the importance of dance among the Greek population.

“Dancing is 80 percent of our culture,” he said. “We have dances for weddings, baptisms and all kinds of occasions. We even have a dance for death. It’s our expression of feelings.”

For nearly 50 years, Papadopoulos, at left, has taught Greek folk dances to his troupe of young people who typically range in age from 15 to 35. Although Arlington-based, members hail from throughout New England and are led in dance by the troupe’s teacher, Haralampos Stathopoulos. Every Monday, the group unites at St. Athanasius for two hours perfecting their repertoire.

“I love teaching dance to the kids, and I love this parish and that they give us this space to practice,” said Papadopoulos, who resides in Reading. “It is a very good community and a very good priest. One hand helps another.” 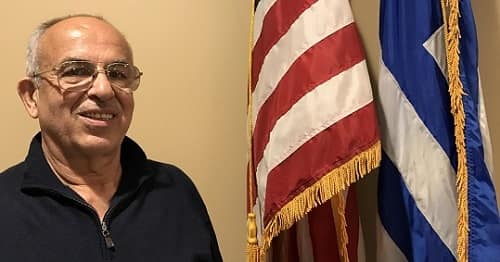 Papadopoulos created the dancing troupe in 1972 after discovering the need for local Greek dancers while attending a Greek Independence Day celebration held at the John Hancock Building.

“At the Greek Independence Day in Boston, we had poems and speeches on Greek history and culture,” he said. “We had to have ethnic dances, and there wasn’t a group around, so they brought in a group from Montreal to do the dances, and that is how I got the idea to create a local Greek dance group.”

The Sons and Daughters of Alexander the Great Greek Dance Group will perform Friday June 2, at 9 p.m. and Saturday June 3, at 8:30 p.m.

For more information about the Sons and Daughters of Alexander the Great Greek Dance Group, click here >>

“He was the greatest of them all,” Papadopoulos said. “At the time that Alexander the Great was conquering the world, he was not conquering the other countries with a sword only. He conquered with his mind, which is why I really admire him.”

Papadopoulos established the Greek Dance Group as a nonprofit to promote Greece’s culture and history. Since the 1970s, the dancers have performed in Boston and also taken the road performing at Greek festivals, concerts and universities throughout the country from Philadelphia and Washington, D.C., to Detroit and Chicago.

In 1988, during Michael Dukakis’ run for president, the troupe danced on the then-Massachusetts governor’s campaign trail 10 times.

Dukakis’ mother, Euterpe, also became a fan of the local Greek dancers sending donations for the troupe’s trip to Greece every four years. When his mother died, Dukakis continued to donate to the nonprofit for their performing tours in Greece.

“Dukakis is a brilliant man,” said Papadopoulos, smiling. “He is second- or third-generation Greek, but he is Greek.”

This summer the troupe will again travel to Greece, where they have several gigs lined up in Anthousa, Kozani, Papadopoulos’ native village, as well as the ancient seaside city of Dion, where they will dance in a fifth-century B.C. theater that holds 5,000 people.

“We travel to a different part of Greece every four years. We have villages that host us, and we dance and do some sightseeing along the way,” Papadopoulos said. “They will have a good time this year.”

From Greece to Woburn

Papadopoulos graduated from Wentworth Institute of Technology and pursued a career as a metallurgist. Besides studying metals, Papadopoulos continued to study folk music of all kinds, from Irish to French Canadian, but the music of his native land continued to hold him the most spellbound.

“It is very rich music,” he said. “With Greek music, there are so many rhythms. We have inherited music from ancient Byzantine times as well as old world and new times. And from village to village, and region to region, from Thessaly, Epirus, Macedonia and the thousands of Greek islands, there are different dances and music.”

All in the family

He and his wife, Roulas, an alumni dancer of the troupe, raised their sons, Tony and Stanley, with the love of Greek dance. Tony taught dance to the troupe for 18 years.

Papadopoulos is excited to now teach the Greek dance to his 3-year-old granddaughter, Kristina. Although Papadopoulos himself no longer performs with the troupe, he continues to dance.

“I dance all the time. I lost both of my knees, but now that I replaced them, I can dance,” he said with a smile.

Besides reverence of the dance, Papadopoulos reveres the past and present dancers of the Sons and Daughter of Alexander and the tight bonds that grow among them.

“I feel like they are my kids,” he said. “The young people come together and they are so close, like a family, one supporting the other. It’s a beautiful thing for the young people.”

The tight camaraderie among the dancers has even sometimes led to a walk down the aisle.

“I’ve had 36 marriages out of this,” said Papadopoulos. “They come here meet, like each other and end up married.”

Over the past year, the dance troupe has been busy performing at New England schools, including Boston University and the University of New Hampshire.

Earlier this spring, they danced at the Greek Independence Day celebration at the State House. Before the Sox took the field on a May night last year, the troupe danced for baseball fans who waved Greece’s blue and white flag at Fenway Park’s Greek Heritage Night.

Throughout the summer, the dancers will return to dance at Fenway and perform at Grecian festivals throughout the state, including those in Woburn, Lowell, Brockton, Lynn and Ipswich.

The Arlington Greek celebration remains one of Papadopoulos’ favorite festivals.

“They all work together and it the biggest festival of them all,” he said. “It is so beautiful how it all comes together under a big tent with thousands of people coming through.

Papadopoulos always likes to dine on the pastitsio and moussaka at local Greek festivals but noted that his favorite authentic Greek delicacy at the Arlington Greek Fest is the gyro.

“The food is excellent, and here in Arlington the gyro is one of the best,” he said, smiling and shaking his head. ‘” I don’t know what they do ….”

Wearing hand-embroidered costumes from Greece, the Sons and Daughters of Alexander the Great plan to perform a set of dances on Friday at 9 p.m. and Saturday at 8:30 p.m.

Papadopoulos hopes the audience feels the energy and dedication the troupe brings to the Greek dance.

“First of all, I hope they take away the dancers’ enthusiasm, the history of the dances and the pride,” he said. “The dancers put their heart on it and are doing it right. Even if you are not Greek, if you see them dance, you have that beautiful feeling.”

He added that the troupe will also invite the audience to join in at the end of the set and encourages participation whether a beginner or not.

This news feature by YourArlington freelancer Aileen Maroney was published Friday, May 26, 2017. This report had 574 hits on June 12, when it was archived from Your View to a news fearture.