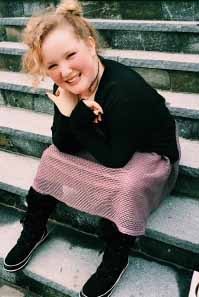 UPDATED, Jan. 17: At just 13, Charlotte Kilroy had her culinary skills tested on "Chopped Junior" -- and she won.

On the Food Network program Tuesday, Jan. 17,  the Arlington resident handled the pressure cooker of competitive food prep. She fended off three teen challengers to become champ, winning $10,000 and a chef's coat.

She said she planned to donate $6.000 of the money to the Trevor Project, providing crisis intervention and suicide prevention to lesbian, gay, bisexual, transgender and questioning (LGBTQ) young people ages 13 to 24.

"She has always liked to help me cook, and especially bake," her mother, Julia Kelahan, responded this week to a question about her daughter's background in the kitchen.

"She took one weeklong summer class at Harvard several years ago, but other than that has just learned by doing."

That doing included working with her mom, who runs a business called Julia Cooks.

"She has definitely learned some from cooking and baking with me," she wrote, "in addition to her own experimenting and video watching, and on some occasions will help with food that I make for clients."

Charlotte sees her best skill as having a good sense of flavor balance and being able to put together a tasty dish with whatever ingredients she finds.

Two favorites she likes to cook are blondies when baking and chicken roulade when cooking.

The home-schooled student, who was 12 when the "Chopped Junior" segment was taped last May, reacted, her mother wrote: "As you would expect -- very excited and a little in shock!"

Asked how she was chosen, her mom allowed, "It was a process that began with submitting a video of her cooking. She then went on to have three phone interviews and one over Skype."

Then it was a matter of waiting. That lasted two months before she knew she would be on.

When the food-watching public sees Charlotte, they may see some familiar faces -- host Ted Allen, whose words can bite, and three judges. On her show, they were the accommodating chef Amanda Freitag, actor David Allen Grier and TV personality Brandi Milloy.