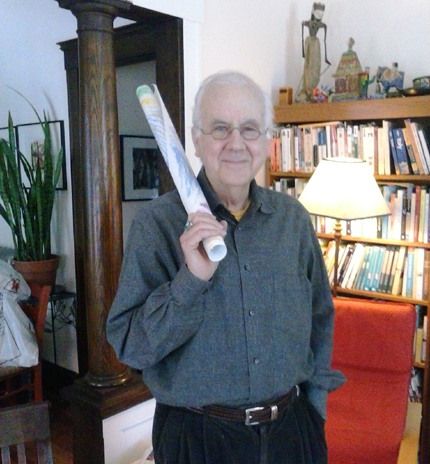 You’re with Kendall Dudley of Lifeworks Career and Life Design in his Arlington apartment, and a creative energy is palpable.

Surrounding you are art, paintings, sculptures and collected knickknacks, with the usual home furnishings. At 73, Dudley is warm and gentle and wears distinctive red, wire-framed glasses.

The oversized coffee table in his living room offers writing and drawing materials in large jars, art supplies, boxes of tea and mugs, as if he is expecting a group to drop in at any moment. It seems many souls, individuals or in groups, have come to hear Kendall’s revolutionary message, "Never start out with a plan."

Dudley’s career as a life coach started at age 6, when his mother, Betty, was fired from her job. She had a natural ability for sales, though not the accompanying math skills required for this kind of work. His father “left the scene,” and his parents divorced. Divorce was then rare and hidden in secrecy.

An only child, Dudley became his mother’s career counselor and life coach, listening and supporting her. From her father, she learned that she could do anything she wanted. Yet this positive message was tainted with the fear-inducing warning: “Be brilliant at it, or don’t do it at all.” Thus, her lack of self-confidence. All the women in his family were challenged by low self-esteem. Dudley was “predisposed to be concerned.” With his help, she continued to pursue work and was resourceful.

Betty was beautiful. One of Dudley’s paintings in the living room is a portrait of her as a girl with a pet rabbit in her lap. By age 12, he would advise her about options for work. Relocating for her work was their lifestyle, which he discusses in a matter-of-fact manner. In chronological order, they lived in New York City, Dallas, Texas, New York City, Tucson, Arizona, Santa Barbara, Calif.; London, Fairfield, Conn.; and New York City. In Tucson, she was an actress and an on-air television personality.

Dudley’s journey continued when he received his bachelor’s degree from the Wharton School at the University of Pennsylvania. He went on to Columbia University for his master’s in politics and international relations, with a focus on Middle Eastern studies. Many with advanced degrees in politics and international relations sought work with the State Department. However, the setting was the Vietnam War, and he was "vehemently against the war….our legacy of colonialism, our blindness toward Communism, the abuse of military power and the sheer destruction of life."

One hundred percent more appealing to Dudley was joining the Peace Corp, which “fostered empathy between cultures, gave Americans a real-world experience of living in a very different culture, a chance to learn a foreign language ….” He studied Islamic architecture in Iran in the two years in the Peace Corp. Yet a career seemed to elude him, though he worked in consulting jobs at Harvard University for 15 years – ironically, as a career counselor.

Another story line emerged: In Iran, he had begun keeping journals, and that kind of writing came naturally to him.

"Three seminal influences" on Dudley’s path were his mother’s early death when he was 19, two years in the Peace Corp and journal writing. One man in a journaling class asked whether Kendall could help him with work issues using journaling. Though he had not used this approach before, his "body said yes!" and he "pulled career counseling out of my hat."

He combined writing and "paying attention" with career counseling and how our life story tells us about our sense of why we are here. One universal idea he became aware of through his counseling experience is that most people don’t think they have a choice when it comes to work and careers.

Dudley’s own work has been an additive process, which exemplifies his revolutionary approach, not to start out with a plan.

He has charted his own growth and created ways to incorporate that growth his work. He included the journal-keeping process into the career services. He discovered drawing and painting and incorporated them into my journal teaching and career envisioning process.

Knowing travel gave him fresh insight into work and life issues, he now incorporates travel into the programs he offers. "Envisioning life and work is a design process that draws on many parts of our experience so that they can be shaped into providing a clearer vision of who we are now and the work that grows out of that knowledge," he said. "I followed what seemed most real and alive for me and then stitched those findings into my emerging work." 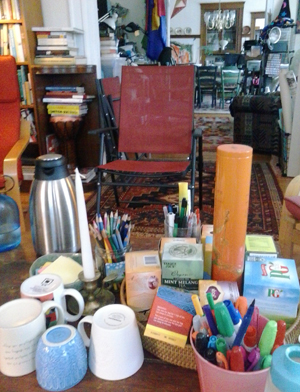 Dudley resonates with Charlotte Rampling’s musings expressed in a recent New York Times interview discussing her latest film, 45 Years. She describes still having a live connection to characters she played throughout her life.

Dudley tells of the character Rampling played as a young actress in The Night Porter, a concentration-camp inmate tortured by a prison guard. Grieving his mother’s death shaped him, became his "Night Porter." Betty remains his creative muse.

Dudley was able to salvage what was positive in his childhood, learning that "detoxifying our past is part of self-discovery. He works with his clients to access the many experiences that have shaped them in positive ways, but they may not be aware of.

We can get stuck from thinking about ourselves in limited ways. "We all have mind-sets which may not be accurate," he said.

It takes strength, self-awareness and help from someone with a perspective like Dudley’s to say, "I’m not buying it." Not starting out with a plan seems a creative, left-brain approach to learning what you are "supposed to do."

Dudley helps people sift through the sand and identify the pearls in their life story that can connect them with a time they felt most alive. An exercise he asks new clients to do is to bring to their appointment some meaningful objects. A man brought a hammer, a book, a photo and a saucepan to their first meeting. In the discussion about the items, no story kicked in for him about any of the objects.

An image showed the way

As Dudley helped him to put them back in the canvas bag he brought them in, he noticed the image of a sailboat on the bag and asked what that meant to him. The man best related to his father when they were on a sailboat together. He made the connection that he thought about chartering a fishing boat out of St. Thomas. He had a dream about it and brushed it off. The client then went to St. Thomas, bought a charter boat and invited his father.

Many people, particularly older clients, discount such dreams. Dudley believes our culture tells us that, as older adults, our best years of work are behind us. He coaxes clients to go countercultural. We can be held back by messages from our family, friends, spouse, etc., that might not be accurate.

We all have difficulty with change. He challenges people’s assumptions about the future and suggests, "Why not do it now?" Clients are encouraged to keep journals about what they notice. For those not interested in journaling, he asks them to write life stories about times they felt connected to what they were doing, going back to their earliest experiences. Dudley calls it "going to where the energy is" and "stoking the fire."

He likes to have clients "shake things up" and do things they never would consider doing to discover themselves, such as suggesting his nonactor clients take an acting class. Clients are regularly surprised to discover they are being guided to paths "hidden in plain sight."

Starting on Thursday, March 17, from 12:45 to 2:15 p.m., Dudley is offering a four-week workshop for $140 focused on looking at the next step in life, work and elements that may be hiding in plain sight. Inspiration from this group can create new work ideas and alternative visions of ways to live.

To discover other options for working with Dudley in career and life design individually or in a group, go to his website, www.lifeworkscareers.com/.

This profile was published Tuesday, March 15, 2016. The writer focuses on features stories for YourArlington. She has participated in Dudley’s writing workshops.