Paid support
News: What we know about the Omicron variant

Roly Chaput, with a volunteer's heart, dies at 82 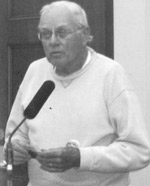 Arlington has lost a man who was the heart of volunteerism here.

Roland E. Chaput, whose home overlooked the Robbins Farm Park he loved and served so well, died Saturday, Jan. 23. He was 82.

"Roly was the epitome of Arlington's impressive volunteer spirit," Town Manager Adam Chapdelaine wrote. "His many contributions and positive attitude will be sorely missed."

The news caught many by surprise. A number in Town Hall reacted with an audible "oh," after Moderator John Leone announced the passing Monday, Jan. 25, at the Special Town Meeting. Chaput had been a Town Meeting member for more than 44 years.

In the words of some who knew him, let us count the ways he will be missed:

-- Selectmen Joseph Curro Jr. told the board he was "devastated," noting Chaput's service on many town committees, including cochair of the town's 200th-anniversary celebration, in 2007. "He was such a kind man," whose vigor led him to climb all of the New Hampshire peaks 4,000 feet and higher.

Curro held up a copy of Legendary Locals of Arlington, a book about unsung heroes that includes photo of Chaput standing at the microphone in the selectmen’s chambers -- "the way I like to remember him," Curro said.

-- In his personal blog, Selectman Dan Dunn wrote: "Roly was a stalwart, a relentlessly upbeat, can-do volunteer who dedicated hours and hours to our community. I mourn his passing."

-- Alan McClennen, who served as town planning director from 1974 to 2004, and now seeking a second term on the Orleans Board of Selectmen, wrote:

"Roly was a very special Arlingtonian. He was everywhere volunteering for the town. Whether it was conservation matters, bicycle riding or the years on the Redevelopment Board, Roly could be counted on to tackle the challenge, study it until he understood it and then move steadfastly to carry out the project.

"In his 'retirement' he also volunteered at the Jefferson Cutter House to support the Cyrus Dallin Museum.

"Roly and I discovered that we had something else in common: We both owned and cherished our Model A Fords."

-- Chris Loreti wrote that he served with Chaput on the Redevelopment Board for about five years, "from the time I joined in 2006 until the time he left in 2010. Roly was a steadying influence on the board. He was savvy about the ways of the town and had the diplomatic skills to get things done.

"I believe this is why he was able to serve the town in so many capacities. His family has lost a beloved member. The town has lost a consummate volunteer."

-- Geri Tremblay, a trustee and director of the Cyrus Dallin Art Museum, wrote that the museum "has lost a great friend and colleague .... He joined the museum many years ago when asked to become a trustee and help establish the galleries.

"Over time, Roly moved statues, painted walls and floors, found donated furniture, led group tours and guided visitors at the museum. He helped design and install the exhibit 'Tea with the Dallins,' which was held at the Old Schwamb Mill."

Chaput and grandson Nolan videotaped this and several other exhibits and lectures so they could air through ACMi, the town's cable-TV studio. Eventually, Chaput with founder Jim McGough were museum cochairs.

"One time," Tremblay continued, "several trustees traveled to the Museum of Art in Springville, Utah, to see their collection of Dallin works, meet their staff and Dallin’s biographer Rell G. Francis.

"The trustees visited Dallin monuments in Salt Lake City, the LDS Tabernacle and Museum of the Daughters of the Utah Pioneers. What a great experience and a good time to be together. As an ambassador of the Dallin Museum, Roly made friends with whom we continue to research and expand Dallin’s legacy.

"The directors and trustees of the Cyrus Dallin Art Museum will miss Roly. To quote one board member, he was a 'vibrant and energized part of the museum' as well as a trusted and valued friend to us all. Our thoughts and prayers are with the Chaput family."

Many examples of helping town

-- Precinct 6 Town Meeting member Ted Peluso added personal stories about his friend, who he knew from four years of working together at ATED, the Arlington Committee on Tourism and Economic Development. Chaput was the treasurer and served in many ways the town visitors' center, which opened in 2014.

"I have never heard him say a bad word about anyone," Peluso said in a phone interview, referring in part to conversations with Chaput while sitting on the visitor center porch.

Chaput played a key role as a founder of the Friends of Robbins Farm Park, which says on its site: "Roly gave heart and soul to our group and his generosity and wisdom were an inspiration to all of us."

The Friends group got its start in October 1998.

After he left the Dallin museum board, Peluso said, he continued to volunteered, showing youngsters around the museum on Thursdays.

At 80, he got down on his hands and knees and installed the rug and molding at the visitor center. As Peluso held a ladder, Chaput climbed it and installed banners at the center provided by Mirak. The place needed flowers, so he brought them. It needed furniture, so he found some. Last April, Chaput helped rake the Uncle Sam Plaza area clean of winter debris.

Gina Johnson, an artist who is an administrator at the Legacy apartments, plans to paint of portrait of Chaput. Her works honoring veterans have been seen at Patriot Day parades. Chaput served in the U.S. Army in Korea.

How new book views him

-- From the text of Legendary Locals of Arlington, Arcadia Publishing, 2015:

"Some people retire and do volunteer work for a few hours a week. Chaput turned his retirement into a fulltime unpaid labor of love for his town.

"Since 1994, he has been a member of the advisory council for Brackett, his neighborhood school. One of his proudest accomplishments is organizing a group of seven or eight retirees who, on a weekly basis, read with kindergarten children who need extra help ....

"[The 350-member Friends of Robbins Farm Park] 'promotes the beautification, restoration and improvement' of the park and its playground and sports fields. Roly helps organize several annual park events, including a yearly clean-up, a field day, a Fourth of July celebration, a community garden, and an outdoor concert series. Friends of the Robbins Park have raised over $50,000 to replace a long slide that continues to be a favorite of the children.

"Roly led the effort to retrieve the Robbins family's Labrador mastiff statue that had gone missing for 65 years." Read details about that here >>

-- In September 2014, I was sitting at a rough picnic table near the Kickstand Cafe with Peluso and Chaput. Both had "great story ideas" for me, but that day, Chaput's enthusiastic offering won out.

"The day after the visitor center opened officially [on Town Day], it was cold, and we were about to close when a car parks, and four people get out. One wore a shirt that said 'Uncle Sam.' Turns out, he wrote a book called Who was 'Uncle Sam.'

He was Jean-Pierre Mouraux of the Uncle Sam Museum in Mason N.H. The first 35 pages cover the Arlington era, including stories about Paul Revere's Ride and other Revolution-related activities in Boston and surrounding towns.

"These folks live in Sam's house," Chaput said with excitement, adding with reference to both towns: "Maybe we should do something together."

Maybe we should. It makes me sad to waited so long to suggest this.

The obituary from the Keefe Funeral Home provides information about survivors:

He is also survived by 10 grandchildren and many nieces and nephews.

The first visitation is scheduled for the Keefe Funeral Home, 5 Chestnut St., on Thursday, Jan. 28, from 3 to 7 p.m.

The funeral from the Keefe Funeral Home is set for 10 a.m. The funeral Mass in St. Eulalia’s Church, Winchester, is set for 11 a.m. Officiating is the Rev. James W. Savage.

Relatives and friends are invited.

In lieu of flowers, donations can be made to the St. Matthew’s Food Pantry, c/o Saint Eulalia’s Church, Ridge St., Winchester, MA 01890.

This appreciation was published Wednesday, Jan. 27, 2016.

Join fellow registered artists for a…

A public presentation of the town's draft plan for housing was held Tuesday, Nov. 9, and town…