IN THE CARDS: Her art provides path to recovery 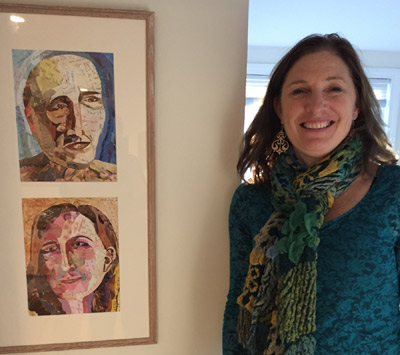 While recovering from a second bout with cancer, Janice Hayes-Cha received dozens of get-well cards. She enjoyed reading them and appreciated the caring thoughts expressed inside, so she stashed them away to look at now and then. One day it occurred to her there might be a way to transform these kind expressions into something else, to make something positive from her illness while preserving the wonderful cards.

Hayes-Cha turned the cards into collages, starting out tentatively by making simple flowers. Now she makes large scenes: the Citgo sign in Boston, the subways rattling along the Red Line.

From a distance, her works look like paintings: Come closer, and you see they are made up of tiny scraps of paper, painstakingly cut from the greeting cards. Come closer still, and you’ll see handwriting or a name, remnants from the cards.

Once in a while, she may sneak something in, such as a tiny photograph or pieces of wallpaper. As she plans her composition and carefully cuts and glues the cards, she enjoys rereading their messages. Through this process, she has said, the cards become part of the art and many separate, beautiful pieces become a cohesive whole.

Hayes-Cha has shown her work in the Philadelphia area, where she and her family were living before returning in 2015 to Arlington, where they had lived from 2004 to 2010. In Pennsylvania, she not only exhibited her work but won grants and awards. She especially enjoyed working with other artists on installations and murals from a women’s arts cooperative and hopes to find something similar here. She is a member of the Arlington Center for the Arts, where she participated in the Open Studios in October.

Becoming an artist wasn’t in the original plan, she said in an interview at her home studio. Nor was the tumultuous time she went through in her late 30s and early 40s. Art had always been an avocation: She enjoyed it as a child and continued taking courses for pleasure as an adult. Her training was in economics and public affairs, and she worked in nonprofit management and communications.

During the family’s first stint in Arlington, Hayes-Cha was executive director at a research institute at Massachusetts General Hospital that focused on Alzheimer’s and Parkinson's Disease. Her husband, Jang-Ho Cha, is a neurologist and neuroscientist. He, too, worked at MGH, but the family moved to the Philadelphia area when he changed jobs, returning when he went to work at Novartis in Cambridge.

Married in her 20s and then divorced, Hayes-Cha was single at the age of 35. She smiles. "For women who are worried it won’t work out for them, that they won’t find someone and have a family, I was the person they’d hear about: someone who at 35 had no one and by 41 had a husband and four kids." The children are Leo, 15, a sophomore at Arlington High School; Joanie, 14, in eighth grade at Ottoson, and the twins, Dennis and John, 12, in sixth grade at Ottoson.

Life was happily full, her twins only 1½, when she was diagnosed with breast cancer. There was history: Her father had died of colon cancer, and his mother and sister of breast cancer. Hayes-Cha’s sister has also had cancer. "So I understand it’s a familial thing, and I’ve been careful about screenings and mammograms and genetic testing," she says.

"The time can fly by when you’re really into something. It's helpful to focus on something."Janice Hayes-Cha

She underwent a year of treatment only to learn six months after the treatment ended that she had colon cancer, yet another unbelievable situation for someone who had been so careful as she had begun having colonoscopies well before the recommended age of 50.

But she endured. She had surgery for the colon cancer and then a long recovery period -- and still another batch of cards.

She turned to collages, where she had already had success. Her children had gone to the Brackett School, where she donated a collage for a fund-raiser, a picture of Robbins Farm that turned out to be very popular.

"There was a huge bidding war on it, and I thought, ha, maybe I could make these and sell them. That was the first realization I had something that might be marketable."

Now she works from the studio in her home, creating new collages and scanning some to turn them into prints. She has plastic tubs filled with cards she has received for birthdays and holidays as well as those people give her for her art projects, all sorted by color.

As she struggled with illness, making art was very helpful, she says. "I loved rereading the cards and just loved looking at them and seeing the handwriting of people I love. Those cards were wonderful."

And the work itself is meditative and soothing. "The time can fly by when you’re really into something. It’s helpful to focus on something."

In good health now, Hayes-Cha is grateful to have discovered a way to create her art. She reflects on the process and on the way it began. "The art," she says, "embodies the people who sent the cards and the pieces are filled with their good feelings." 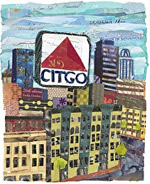 How she does it