Some glimpses behind 3 winning Arlington poets 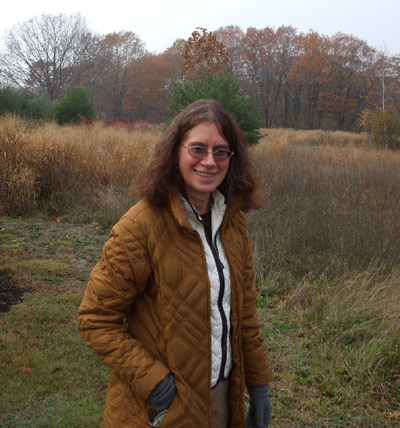 All are traditional occasions for poetry. None of the poems is directly about Arlington.

Words by Kathleen Lentz, Joanne Holdridge and Kim Triedman were chosen by Alan Feldman, a widely published poet who lives in Framingham and Wellfleet.

Lentz is a child psychiatrist with a background in Chinese history who has been writing for many years, starting as an undergraduate at the University of Iowa, where she studied with poet Donald Justice. She wrote "Mrs. Moore," judged the best:

I remember her at the dayroom door
on her way somewhere carrying something
stopping to listen to an urgent child
who would have been asking whether
he could get off punishment or she
could get adopted by the couple who visited her
or maybe it was the girl who meowed
she was tending to
or the boy who hid behind pillars
with his hands over his face.
This was long ago and I was nineteen
and when we first met she'd scared me:
so sure of herself, so clearly doubtful I'd be
of any use, skinny white girl that I was.
In that place
we washed out mouths with soap
and hit small bare legs with sticks
and there too I saw for the first time
an adult who would pay complete attention
to a child, her gaze full on the small face
her body at rest though still commanding
her own face listening as if for a distant bird.

What gave rise to poem?

Asked about its genesis, she commented:

"I can't say exactly how the poem was born, but, having always remembered her with great respect and gratitude, I was thinking about her again, and the image of her at the door came into my mind very clearly, and for I think the first time I really understood it -- what it was about her that was so arresting to my younger self, and how important the experience of knowing her, and seeing her do her work with the children was for me.

"Writing the poem was my way of understanding all of this better, and was also the only way I could find to finally express my thoughts and feelings and honor her.

"(I tried to find a way to contact her, thinking that maybe now, in the internet era, I'd be able to go back to Chicago where I'd worked with her and be able to tell her in person what I now understood -- but I could not locate her.)"

Feldman, who chose the poems, commented to Levine about what he was seeking in the verse submitted. "I was looking for poems that addressed me more or less in the American idiom, that didn't seem to be straining to be poetic. So that eliminated many worthy efforts.

"But I needed to hear what could seem, plausibly, someone's actual voice."

As to Lentz's poem, he wrote: "this one gave me a lot of interestingly complicated information about an orphanage (or some institution for children) as remembered by a speaker who worked there as a young woman many years before. Mrs. Moore ran it strictly ('we washed out mouths with soap') but also seriously paid attention to children.

"In few words the poet evokes these kids: for example, 'the girl who meowed' is just dropped in without explanation, but it's an authenticating detail."

Holdridge, a poet and educator at Bunker Hill Community College, received a second place for "Where the Ocean Ends and the Sky Begins":

When the sea looks like this
the exact same shade of gray as the sky
so I can’t tell where the ocean ends
and the sky begins, the clouds hang
so low the roofs of the houses across the harbor
look blurred, and silver sheets of rain pound
down on the deck outside this café
I remember lying tangled up with you
in your old gray sheets listening
to rain falling on the roof, making love all day
sleeping for a little while and then waking
ready to touch each other all over again
like the rain outside today falling and falling
without easing off or letting up without
stopping, just falling and falling as if it
doesn’t want to do anything else

Of the poem, Holdridge noted that she wrote several years ago "but have been playing around and tinkering with it in the years since.

"I also brought it to one of Miriam's excellent workshops at the library before I submitted it to the contest.

"As to what led me to write it, well, passion, of course. What else?

"An act of memory that both is linked to a beloved place, the deck of Helmut's Strudel in Rockport, and not that place at all."

She apologized, fearing she had not answered what gave rise to the poem. "I'm not trying to be willfully obtuse here, but that's about all I've got."

Holdridge has more than 100 poems published in a wide variety of publications, including Pinyon Poetry, Rattle and Spare Change.

Feldman commented: "Among the 100 plus poems I read, there were many more about sickness and death than about joy and pleasure. This was the only poem, I think, about passion.

"The rain is 'falling and falling as if it/ doesn't want to do anything else,' a terrific metaphor for the seemingly limitless passion of early love.

"The poem is written simply but musically, in that it uses repeating to achieve an unpretentious lyricism."

Triedman, an award-winning poet and author of the recent debut novel The Other Room as well as two full-length poetry collections, Plum(b) and Hadestown, released in 2013. The Other Room was one of four finalists for the 2008 James Jones First Novel Fellowship, and Kim’s poetry has garnered many awards, including the 2008 Main Street Rag Chapbook Award and the 2010 Ibbetson Street Poetry Award.
Following the 2010 earthquake in Haiti, she cochaired a collaborative poetry reading at Harvard University to benefit Partners in Health and the people of Haiti.

My mother taught me about joe pye weed – how there are
actually two varieties. Who’d have thought? She taught me that
one man’s weeds are another man’s wildflowers, too, she taught me
to listen very closely for the chirrup of the wren. She’s still
teaching me: I find myself heeding her
ever more greedily as the days grow long
and then short again, now the twin bangles of age
weigh on both of our wrists and my own daughters
have learned what they will
and flown on for other lessons. We don’t
talk about it, she and I. We both know
how blessed is the time. These days not even the skunk cabbage
goes by unnoticed.

Triedman wrote the poem in September after a visit to her parents' home in southern Rhode Island. "My mom and I had taken her dog for a walk, a 2-mile loop we frequently take along the coastline.

"It was a spectacular day, and the fall wildflowers -- mostly purples and golds -- had begun to dominate. As usual, my mom supplied me with bits and pieces of information along the way, this time the identification of something called "Joe Pye Weed," which comes up with a vengeance at the end of summer.

"When I came home, I looked it up in one of our big wildflower books, only to discover that there were actually two varieties. Hence, my first line."

Feldman commented that poem is "about generations: the speaker, her mother and her grown daughters. As she's aged, the speaker has grown closer to her mother, who seems more than ever to have imparted important knowledge ....

"But what I like in this poem is the way the mother's knowledge is represented by specifics: two varieties of 'joe pye weed' the speaker tells us, 'Who'd have thought?'

"I can hear her laughing gently at herself and her mother, but so pleased to be recollecting this. She ends with something sharp and particular, burying the 'message' of the poem in its penultimate line ('how blessed is the time') and then making this idea come alive by illustrating it with something the reader can really see, 'These days not even the skunk cabbage// goes by unnoticed.'