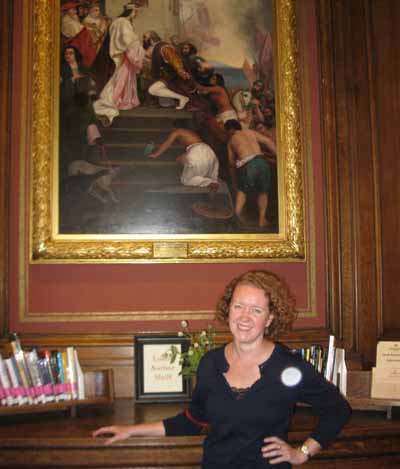 Yes, you can still borrow books from the library. But Arlington patrons know they can also borrow movies, audiobooks, prints, puppets and toys, museum passes and even microscopes and American Girl dolls. It’s also where you can see a Japanese film or learn how to down-size your home. Two-year-olds can enjoy a singalong, while older children are taught how to play chess.

The role of the library has evolved and continues to change, says Andrea Nicolay, at left. Named director of libraries in May, Nicolay was honored at a reception at Robbins Library in September. Libraries, she says, are becoming a cultural crossroad, where people can be introduced to new ideas and meet new people.

'We are on the verge of evaluating our interior to make it more of a 21st-century library.'
Andrea Nicolay

"I think that people are seeing the library as a place to gather and to experience ideas or forms of culture they might not be used to," she says in an interview. She points to an upcoming singing program for adults or an afternoon of hot chocolate and a movie for teens or a program on how to build a bicycle.

The Arlington libraries provide a wide range of programming for different age groups and people with varied interests. Now, Nicolay says, it’s time to do even more -- namely, redesign the library’s interior to reflect its patrons’ needs.

"We are on the verge of evaluating our interior to make it more of a 21st-century library," she says.

"People are constantly looking for places to plug in and do work or for flexible spaces, meaning tables for collaborative work, or for study rooms. Our community room and conference rooms are almost always booked."

Nicolay says the redesign process will begin soon, with the hiring of a space planner. Surveys and focus groups will be conducted to learn what patrons would like. Ultimately, an architect will design what she describes as a "reimagined interior."

She has had plenty of experience working in libraries that went beyond books. Hired as assistant director and head of adult services in Arlington in 2012, Nicolay had already worked in several branches of the New York City library system. She was library manager for the Chatham Square Branch of the New York City Public Library in Chinatown, the adult-services librarian for the Mulberry Street Branch in Soho and worked at the St. Agnes Branch on the Upper West Side.

"In New York City a lot of neighborhoods cohere around the library, and it’s seen as a family center and gathering place for neighbors," she says. "In fact, we started a program at Mulberry Street called ‘Meet the Neighbors.’ It was a new branch, and it was exciting to think about how to serve the community and bring people together." One of her ideas was to create gallery space in the SoHo library, well aware that it was challenging for artists to find places to display their work in a community overflowing with artists.

After 14 years in New York City, Nicolay was ready for a change. "I wanted to be in a community that was more breathable. I wanted to be in a beautiful place that reminded me of where I came from, which is Haddonfield, N.J., a small town founded in 1682 that has the Colonial homes and the kind of history that Arlington has.

In Arlington she says she found a community with well-established families as well as eager newcomers, all with high expectations for its libraries.

With that in mind, Nicolay says a constant discussion among staff is how to provide good service, realizing it comes down to the initial contact librarians have with a patron as well as programs that appeal to diverse audiences. The Russell Fund provides funding for programs for children and families, helping to make the library fifth in the state in terms of children’s attendance with singalongs, crafts and concerts that take place both at the Robbins Library and the Fox Library.

Teen programs are aimed at helping this age group find a third space, in addition to home and school, where they can work and study and even play. Programs for adults include the Plugged-In series, funded through the Barry Fund for people age 50 and over. A new program called Alt+ will be offering a series aimed at 20- and 30-somethings, including a presentation about the art of tattoos.

All of this planning seems to be paying off. The library has about 1,000 visitors a day. This year it was open during the summer on Saturday mornings from 9 to noon, and around 400 visitors came during the three-hour time span. The use of electronic books is booming, tripling to about 3,000 a month in the last year.

Downloadable books are just one of many kinds of materials offered by the Robbins and Fox libraries, which have more than 86,000 videos and DVDs, almost 57,000 compact discs and cassettes and over 39,000 print periodicals, e-books, audiobooks, museum passes and other materials.

Regular, old-fashioned books? The library has an estimated 490,000.

The latter read a statement from Ryan Livergood, now directing a library system in Illinois. He wrote:

"I couldn't be more excited about Andrea being selected as the new library director. Her passion for the library and strong commitment to serving the community, along with her intelligence and strong work ethic, make her the perfect choice for the position ...

"I really miss working with Andrea. She is an amazing individual and I know she will do a wonderful job of working with all of the amazing groups and individuals that make the library so magical and further its greatness."

This story, written by freelancer Marjorie Howard, was published Saturday, Oct. 3, 2015. The numbers in the report are according to the Robbins Library website.