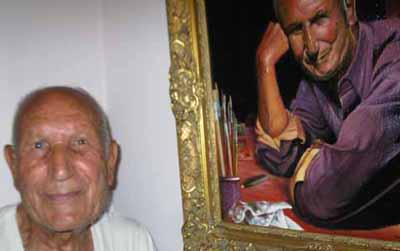 UPDATED, July 24: An artist opens his own eyes so that we may open ours. He sees into our closed hearts so that we find new openings to life and the world.

So it has been for much of the long life of Umberto Centofante, who is nearing 91. For this precise craftsman, one wonders: From where did his art spring, and how did it develop?

"Nobody teach me anything," he said definitively at the kitchen table of his Arlington home. He taught himself.

From a young age, he remembers thinking: "I wish I could paint ... I had it in my mind to paint."

As he spoke, with his daughter, Diane Kafalas, nearby to help explain, his brown eyes blazed, one finger of each hand pointed toward each temple.

But work on a farm where a large extended family lived came first.

As a youngster in school -- he was perhaps 8 -- he had a Thursday art lesson and a teacher who saw his talent. It was June.

The teacher asked him to show the school's superintendent what he could do. Recalling the event from 1932, he described his fear as if it were nearly present: "I almost gonna cry."

With the teacher's encouragement, he drew what he knew -- a cow delivering a calf.

The teacher gave him an empty album, and that summer young Umberto sketched what he saw and knew -- the earth, people, what farmers do each month -- "a pictorial essay," his daughter suggested.

The superintendent submitted his work to Italy's king -- Victor Emmanuel III, who served from 1900–1946. And after three months back came a check for 47 lira.

In one sense, the recognition was short-lived: The money did not pay for art school; it disappeared into family finances. In another sense, the honor remained, an inspiration to how his art might grow despite's reality's interruptions.

Centofante became a police officer, assigned to Rome, until the Nazis marched in during World War II and said he was not needed.

In 1952, after appeals from an uncle, he moved to work as a mechanic in an auto shop near Boston. Among the trades he developed during 31 years there was, ironically enough, painting -- that is, applying spray-paint to repaired vehicles.

Still, over the years, he continued to develop his art. You can see his painting displayed in the Arlington Center for the Arts' Gibbs Gallery through Aug. 28. In a visit to his home July 15, YourArlington saw the breadth of his craft.

As we toured a home that serves as a museum, Centofante and his daughter were asked about how he learned to paint and what the source of art was.

At length, he said simply: "I stole."

This straightforward admission penetrates to the heart of much artistic creation. For this former police officer, or any artist, it is not a legal matter; it tells how creative people borrow from others to make an artistic production theirs. That borrowing does not detract from what an artist -- what Umberto -- has created on his own. His own patings make his creative impulse clear.

Asked specifically how he drew the sheep shown in a large farm landscape hanging in his living room, he said, "It's easy." He knew from his own observation, and in cases where had not seen what he wanted to draw, he used photographs and National Geographics magazines. He received them for years, their glossy pages recording scenes worldwide.

In addition, as he taught himself, he visited many museums, seeing works by the masters at the Museum of Fine Arts in Boston and renowned venues in New York City.

In all, most telling is his close observation and attention to precise detail.

In the dining room hang loving portraits of his wife, Pia, who died in 2011, and a self-portrait, which he created seven years ago by painting while looking in a mirror.

Works beyond painting include other works from his careful hands -- a tall grandfather clock near the home's entrance and a large, wooden cabinet in the living room built in 1974. It enclosed a phonograph with a vinyl, 78 rpm record.

In the basement, we saw a wooden display case, stained dark; a polished jewelry case with designed inlays inserted after careful use of a router; and a glass-encased 16th-century sailing ship.

On its deck work tiny sailors, each fashioned from a 2-inch-tall wood block, its details added by subtraction with small Dremel drills.

On the wall, a bouquet of ribbons, some for the Watertown Art Association shows, flower.

"I believe God gave me talent to use," he said.

And so he has.

The Center for the Arts' connection with Centofante dates to a few years ago when he entered a couple of his paintings in an open group show at the Gibbs Gallery, said Linda Shoemaker, the ACA's executive director.

He has entered artwork in several of ACA group shows since -- a small-works show, where he sold several pieces, plus our annual members show and the "Images of Arlington" show. Last year, one of his Arlington paintings was selected to hang at the State House in Senator Ken Donnelly’s office as part of "Images of Arlington exhibit."

She wrote: "We were impressed by the fine skill in his paintings, of course, but as we got to know him, we really fell in love with his spirit and indomitable passion, energy and zest for life! Umberto is an Arlington treasure, and I’m so pleased that the Arlington Center for the Arts can help shine a light on him, his artwork and his life’s story."

See examples of his painting here >>

Exhibit on view through Aug. 28.

This story was published Monday, July 20, 2015. Elaine Gleason, one of Centofante's daughters, provided some of the information. This story was updated July 24 to make clear the basis of the creative process.