A 'cheerleader' for cancer aid needs your help 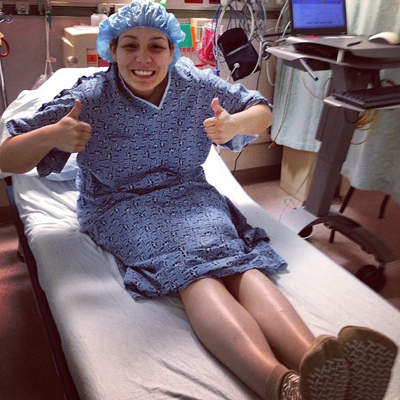 UPDATED, March 4: An Arlington woman who as a young girl sang the National Anthem at a cancer fund-raiser for her cheerleading coach now has others singing for her.

Courtney Jones, undergoing treatment for a rare liver cancer, has many pulling for her.

They include Carla Dorato, owner of the Artful Heart Gallery, at 311 Broadway, the host for a special evening on Thursday, Feb. 12, The shop donated 20 percent of all sales to Jones.

A second fund-raiser is set for the American Legion in Woburn from 7 to 11 p.m. Saturday, March 7. See more details below.

"She is very lucky to have so many supporting her," her mother, Robin Jones, said in an interview Sunday, Feb. 8.

She reflects her positive spirit from her bed at Beth Israel in the photo at left.

The 23-year-old town native has been active in the Arlington Children's Theater since age 7 and with the American Cancer Society’s Relay For Life here for 14 years, since age 9.

After singing the National Anthem at the latter event, an annual, nightlong march around Peirce Field, she rose to chair the event.

She volunteered as a coach with Arlington Pop Warner Cheerleading as well as the St. Agnes cheering programs, though her time helping with the latter has been limited because she got sick.

Following stomach pains, which were misdiagnosed earlier, her mother said, doctors at Beth Israel Deaconess Medical Center zeroed in on the problem -- fibrolamellar hepatocellular carcinoma, a rare cancer. This type of cancer typically affects adults in their 20s. It is so rare that there are only 200 new cases diagnosed worldwide each year.

Asked about the prognosis, Courtney's mom described her "in good spirits," though the past month has been "a long haul."

Working for just over a year as a waitress and bartender at the Ninety-Nine in Woburn Four Corners following college at the American Music and Dramatic Academy in New York City, the illness has resulted in multiple hospital stays and surgeries, limiting her ability to work.

Courtney herself wrote Feb. 11: "As for the future, I am optimistic because of love and support from family and friends alongside the amazing care I am receiving from Beth Israel."

Store owner Dorato has a broad connection to the Jones family. Robin and Courtney's grandfather, Richard, both contribute to the shop -- he creates stained glass; she crafts.

Dorato, who has known Courtney since she first attended the Stratton School, called her a "little bottle of love."

Why? Because of all she's done to fight cancer.

"She's vivacious ... and so kind," said Dorato in an interview.

Indeed, she said, the whole family has long been involved in supporting the fight against cancer.

Proceeds from Feb. 12 sales at the Artful Heart, which observed its third anniversary last year, will go directly toward medical expenses.

Enter the raffle for Courtney Jones:

There'll be plenty of activities, including a photo booth, raffles, artwork and DJ entertainment, all donated by friends and supporters. We're strong supporters of Courtney and want to see a cure. While you're at it, stop by The Artful Heart Gallery to enter our own raffle for her.  Tickets are $5 each, or three for $10. The winner will come away with more than $500 in art.

This story was published Monday, Feb. 9, 2015, and updated March 4. Margy Rydzinski contributed to this report.