Family values: A holiday pitch to the crowd 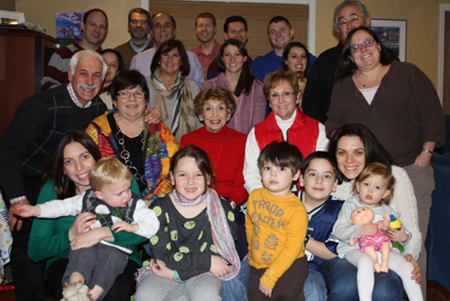 The Mendelsohn mishpuchah: Family aids Jimmy Fund.  It's a joyful problem, as the number of relatives attending holiday gatherings grow -- what to do about too many gifts?

An Arlington woman has found an answer: Use crowdsourced funding to aid the Jimmy Fund.

"I wanted to know what more we might do," Jamie Mendelsohn said. "We have everything we need and others don't. So how do we get together as a group and [address] that?"

She sought out to donation site DreamFund and targeted a longtime effort that battles cancer. The disease has affected members of her extended family, and, as it happens, Mendelsohn's grandfather, Irving Shapiro, led a group that founded the Jimmy Fund, in 1947.

Every year, Mendelsohn said in an interview Dec. 10, family members descend for the holidays to celebrate, an annual event for her since childhood. But the numbers are on the increase. In the photo at right, 24 people of all ages smile (Jamie is hiding on the left behind the white-haired man).

One result? "Too many presents," Jamie said, wondering, "How do you get them under control?"

Headlined "BMSMMYBF’s Give Back for Christmas" -- the initials stand for members of her family -- the page says they decided not to play Secret Santa or have a Yankee swap, but to help others.

Doing so can be fun, too. Each donation enters you in the Christmas raffle. Mendelsohn said those involved will award small prizes based on the number who donate.

Why the Dana Farber Cancer Institute (Jimmy Fund)? The webpage explains: "They do amazing work and continue to need funding for all sorts of projects and continued research."

In addition to honoring those family members struck by the scourge, Mendelsohn noted the effort honors those relatives who have died in recent years. Granddad Shapiro succumbed in 2008 at 96.

The fund-raising site mails all of the tax-deductible donations to the Jimmy Fund, and participants will get a tax letter by email about five days after donating.

In the Lexington office of Vistaprint, where Jamie works, her job is to let the company know what its consumers are saying about its products. In this case, she brings her work home: She's an advocate for her extended family.