Headstrong with an echo of Schweitzer 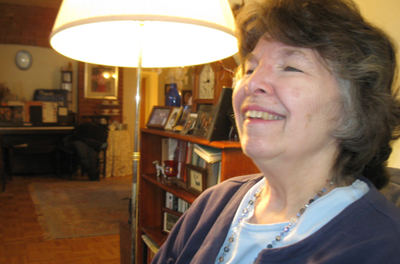 A leader in Arlington child care goes back to the beginning

Gwenyth Hooper was the director of the Arlington Children’s Center (ACC) for 31 years. Having helped raise thousands of children, Hooper is one of the best-known people in Arlington. Yet few really know her.

She is not just an engaging, insightful and loving person. She is also gutsy, headstrong and highly principled, as revealed in a wide-ranging interview.

Hooper was born before her time -- literally -- in the elevator between the sixth and seventh floors of Philadelphia’s Hahnemann Hospital. This entry into the world foreshadowed a lifetime of determining her agenda and challenging the way others think things are supposed to be.

Hooper, the second of two daughters, was born in 1940 to Margaret and Dr. Stanton Myers, a dentist. They named her Roselea. When she was 4 years old her parents divorced. Her mother, a nurse, worked part time at night to support the family.

What's in a name?

At 7, Roselea demonstrated her resolve to do things her way: She wanted to change her name. Her mother objected. Roselea, knowing her mother’s strong connection to her Welsh heritage, found the way to get what she wanted.

"Mom," she said, "don’t you love me enough to give me a Welsh name?" Mom conceded, and Roselea chose "Gwenyth," a name connected to an ancient kingdom in Wales.

Mrs. Myers forbade the girls from speaking or seeing their father, which did not seem right to Gwen and led to another act of defiance when she was in high school. She called her dad and borrowed money from a neighbor to purchase a Philadelphia-Lancaster round-trip train ticket. She visited her dad several times. Her mother never found out.

Gwen idolized Dr. Albert Schweitzer. She dreamed of becoming a nurse and going to Lambaréné to work with him. At 18, she enrolled in nursing school, but two years later, she developed epilepsy and withdrew. In 1963, at age 23, she married Roger Hooper, and six years later moved to Arlington.

The feminist movement was emerging. Women with young children, eager to have successful careers, wanted to work full time. But who would take care of the kids?

The only option available was part-time day care, which was little more than baby-sitting. The Hoopers, along with a small group of friends, envisioned a full-time child-care program run by professionals. 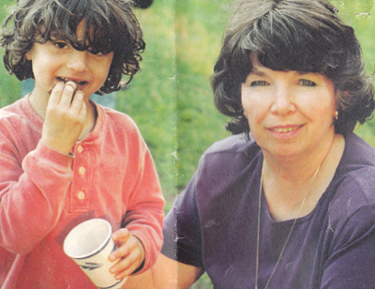 Hooper and a child under ACC's care in the 1980s. They organized. Hooper took on the task of working with town officials. In 1970, Gwen went before the all-male Board of Selectmen.

She asked for their approval to open a child-care facility. They refused. Hooper vividly recalls a member of the board, who she declines to name, pointing his finger at her and yelling, "Mrs. Hooper, women with children belong at home; and you, Mrs. Hooper, belong at home with your children."

After the meeting, he went right up to her, wagged his finger in her face and said, "Mrs. Hooper, women shouldn’t be taking jobs away from men." She said she "bit her tongue" and smiled.

Next up, the all-male Board of Health. The director refused to see her. On her third visit, his secretary intervened.

As Hooper tells it: "The boss came out of his office yelling, 'I’ll sign it, God damn you.' "He grabbed the form, initialed it and then dropped the papers at my feet. I picked them up, smiled and thanked him."

In January 1971, with a teacher, an aide and nine children in attendance, the Arlington Children’s Center opened in the basement of the Trinity Baptist Church in Arlington.

Hooper was committed to making the center a success. She worked five days a week, answering phones, giving tours to parents, covering for sick staff and cleaning the toilets. She did this for two years without earning a penny.

During this time, she also took courses at Lesley College and earned a bachelor's degree in early childhood education.

In 1973 Hooper became the director of ACC. She did the work she loved, continually nurturing and improving the center. It became a model program, as professionals and politicians from across the state visited and asked her to speak at conferences.

Even the selectman with the wagging finger sent his daughter to ACC and became one of Hooper's strongest cheerleaders.

How ACC has grown

When she retired in 2004, ACC served 163 toddlers. The preschool had a fully accredited kindergarten program and an after-school program for 55 students in grades one through five.

Hooper's personal life has also had its bold turns. The couple had one daughter, and in 1970 adopted Robbie, a 4-year-old boy of African, native-American and Irish descent. At the time, Arlington’s population was 99.5 percent white.

Then personal shocks hit her: In 1980, her husband declared he was gay, and their marriage ended.

Three years later, their son, Robbie, also came out as gay. Initially upset and confused, Hooper came to realize that Roger was still a good father and Robbie a loving son.

Arlingtonians struggling with similar issues sought her out. Hooper became a peer counselor, providing one-on-one support to her neighbors. She helped blaze the trail for PFLAG (Parents, Family and Friends of Lesbians and Gays).

For fun, Hooper sang in a choir, Sharing a New Song, which traveled the globe using music as a way of making international connections and promoting peace. Hooper went to Russia three times, Cuba twice, as well as once each to Vietnam, Cambodia and Brazil. She always paid her own way.

"I would rather have the memories of all the people I met than the money," she said. "If I had to live out my life in a dumpy one-room apartment -- so be it."

Gwen, now 73, regrets that when she retired, she was not able to join the Peace Corps and go to Africa to visit the places where Schweitzer had worked. Her application was rejected for medical reasons. She had recently completed treatment for her second occurrence of cancer.

Hooper has chosen to live her life guided by deeply rooted values of compassion, service to others and respect for the dignity of all persons. It’s been a life Schweitzer would have lauded.

This profile was published Tuesday, April 8, 2014. The author is a volunteer feature writer for YourArlington.