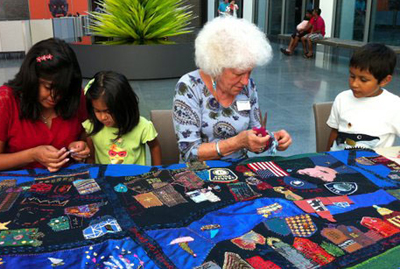 So when you head out into the cold for fireworks, parades, music and light shows this Tuesday night, give thanks to those who sat around a table in a home on Valley Road, near Menotomy Rocks Park.

"I hope I don't leave anyone out," said Clara M. Wainwright of Cambridge, an artist who makes quilts and has fashioned one showing all of the event's founders.

It was January 1976, at the start of the nation's bicentennial celebration, the year of Arlington's first Town Day, and Wainwright's accomplices were talking about how to make the end of a year reach beyond a death and feel more like a birth.

At the first meeting, "they all argued," she said. The second meeting was more productive, and a variety of ideas flowed, including some that will be familiar to First Night attendees. They ranged from the practical and obvious to the conceptual:

-- Celebrating death one year and the birth of the next;

-- Using any space available to artists and musicians, including churches that were important meeting places dating to the Revolutionary and Colonial eras;

-- Events emphasizing the differences between the observer and the observed.

Who were the dreamers?

Who sat around that Arlington table so long ago?

J. Allen Hobson, a psychiatrist who became known for his research on rapid eye movement sleep.

Lowry Burgess, a conceptual artist long tied to MIT, where he created large collaborative projects and festivals in the this country and Europe.

Paul Earls, a pioneer in electronic music who died, 1998. You can see some of his work here and here.

A musician named David Rockefeller as well as Wainwright and her husband.

In a Dec. 26 page-one story, The Globe reported First Night was born out of Wainwright's dread of making New Year's Eve plans. "She wanted to re-create the feeling of a magical Dec. 31 when she was 16, skating on a frozen lake at midnight with a boy she had a crush on," Shirley Leung reported.

In the spring 1977, The Globe came through with money to get the First Night effort going. There was a luncheon, with heads of corporations in Boston, which drew "lots of support," Wainwright told YourArlington.

With a budget of nearly $35,000, the inaugural First Night was held in churches, halls and subway stations around Boston Common. With subzero temperatures and an inch of snow on the ground, it drew about 65,000 people.

First Night became an institution and some years drew a million people on New Year’s Eve and at its height, more than$1 million. The First Night name is now licensed to about 35 cities.

The Boston institution faltered in the recession that began in 2008 and, last June, the organization voted to close.

Then, as Leung reports, outgoing Mayor Tom Menino helped raise nearly $500,000 in sponsorships from corporations and foundations, saving the event for another year.

Wainwright, 77, looked back at 1977 when the event was just getting off the ground and Joan Hobson, the psychiatrist's wife, was its first office manager and a push for publicity helped draw crowds at the end of that year.

While she was remembering, she went back to 1969, when she helped launch the Great Boston Kite Festival,  on the golf course at Franklin Park.

More recently, she responded to Boston events with her involvement in "Mending Boston," a cooperative effort to put together a quilt honoring those who lost their lives in the Marathon bombings in April.