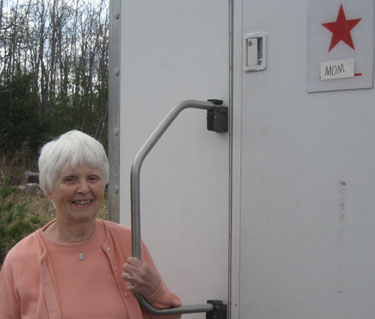 Adele Walsh woke up at the crack of dawn on a blustery March morning, got dressed and headed for Worcester. It was a decidedly unglamorous beginning to a day that would include sharing a movie set with one of her favorite Hollywood stars.

Walsh, 84, had no acting experience when she was chosen to play the mother of Tom Hanks's character in an upcoming movie. Hanks stars as Captain Richard Phillips, the commander of the Maersk Alabama, a cargo ship boarded by Somali pirates in the spring of 2009. Phillips allowed the pirates to take him hostage in order to save his crew.

Walsh, who has lived in Arlington since the 1950s, is featured in a single scene shot at the Worcester airport. In the scene, friends and family members welcome Captain Phillips home following his ordeal. It is not a speaking part.

What got her the part? Her hair

Walsh, a homemaker and legal secretary, landed the role thanks to her distinctive head of alabaster hair. It helped that her daughter, Taryn Weaver, 48, worked as a set costumer on the movie.

"She has this shocking white hair," said Weaver, also of Arlington.

Weaver said her friend, Academy Award-winning costume designer Mark Bridges, had been studying news photographs of Captain Phillips' arrival home. Bridges thought Walsh resembled the real Virginia Phillips and told Weaver to submit her mother's photograph. Another actress was chosen. But the set hairdresser rejected that actress because she did not have white hair. Within days, Walsh was on her way to the set in Worcester.

Soon after Walsh's arrival, the movie crew began the work of turning her into an actress.

Weaver gave her mother a peach sweater set and pants similar to those worn by Virginia Phillips when she greeted her son on the tarmac. Weaver included long underwear to shield her mom from the cold. Make-up came next.

"I had my eyelashes done," Walsh said, giggling, and explained that she has never worn mascara.

Next, a van delivered her to the filming location: a frigid, windy runway with a running jet. According to Walsh, it was a real Maersk company jet flown in for the movie shoot.

"I was really having a lot of fun"

Walsh was placed next to Catherine Keener, the actress who plays Phillips' wife, Andrea. In the scene, Tom Hanks comes out of the plane into the arms of his jubilant family.

"I decided to hold onto the 'grandson' and the 'granddaughter,' because I am not steady on my feet," recalled Walsh. 'They ran into the plane, and I stayed down and waited. And, all of a sudden, Tom Hanks comes down the stairs, and when he gets to the bottom, he hugs his 'mother.' Of course, I was over the moon, because I do love Tom Hanks."

Walsh said they filmed the scene four or five times. "I was really having a lot of fun," she said. "After he hugged me, I was laughing my head off. And that was appropriate. They thought I was acting, but I was just getting a kick out of the whole thing."

Walsh was not formally introduced to Hanks, but she said, he seemed personable and was friendly with the other actors. "It was kind of awkward," Walsh recalled, "Because he didn’t know who the heck I was."

Walsh remembered that she did get a laugh out of Hanks with a remark. "Well, they were all freezing, and so at one point, we got into the van, and the scene was to drive away. And so, one of the actresses said to me, 'Aren’t you cold?' But, I said, 'I’ve got my love to keep me warm,' and I pointed to Tom Hanks."

Walsh said Hanks also made an effort to greet members of the real Phillips family, who were on the set for the filming. According to Walsh, the Phillipses are featured as extras in the scene but weren’t interested in playing themselves in the movie.

The real Virginia Phillips was there, and Walsh said the two women found they had much in common. Walsh raised her eight children in Arlington, while Phillips raised a large family in Winchester. Captain Phillips grew up in Winchester and is a graduate of the Massachusetts Maritime Academy.

Although Walsh enjoyed her day on the set, "I learned that I never really want to be an actress ever, because there’s so much repetitive filming and there’s so much sitting around. And it wouldn’t appeal to me."

Shooting for the movie in Massachusetts took place four days in March, Walsh's daughter said. Its most recent location shooting was Malta.

Alex Worman , a publicist for the movie, said the film's official title is, "Captain Phillips," and it is planned for release in 2013. The Sony Pictures production is based on Phillips' memoir, A Captain’s Duty: Somali Pirates, Navy SEALS, and Dangerous Days at Sea.

This story, written by a contributing reporter, was published Monday, May 7, 2012.