The connection to drums drives Alan Tauber. He's played them since he was 4, more than 50 years. He's long taught them, and, since April, he's sold them at the DrumConnection.

Lining his shop at 177 Mass. Ave., East Arlington, are rows of goblet-shaped djembe, which he called the world's most popular hand drum. The African sets surrounded us like peaceful sentries, with goat skin heads and earthy hues, in contrast to shiny metal drums familiar to Americans.

In the basement is a teaching space, where all ages put hand to drum head seven days a week.

"Drumming is my life," he said. "It is one of those things that integrates the body, mind and spirit in a way that is unique, musical and social. Very healing and lots of fun."

It's a feeling backed by instruction from Tauber's teachers -- Joe Morello, who played with Dave Brubeck, and vibraphonist Gary Burton.

A feeling girded by passion for Guinea, the economically poor sub-Saharan nation that has become Tauber's second home. There, in 2007, as bullets of a civil war flew, he married.

How he met his wife, Fanta, a dancer, is a story in itself, one that reveals his connection Guinea and the generosity of its people.

During one of his trips to Guinea, which began in 2002, Tauber hurt his shoulder and needed ice, not easy to come by in 95-degree heat. A young woman heard from her brother about the need. "I'll get it," she said and then walked a couple of hours to complete the deed.

"I didn't know this was happening," Tauber said.

Later, the first thing he saw, held out to him, was the ice in a plastic bag. Behind it was a smile. "Pour toi," she said. (For you.)

"She didn't want anything," he said. "She just wanted to help. I just couldn't let go of that." 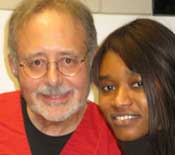 Alan and Fanta Keita Tauber As we talked, some customers browsed. "That's a Nigerian log drum," he told one.

Our conversation ranged over his youth in Boston, where his dad was a doctor. It covered the seven years Tauber spent at Berklee in the 1970s to 1990, when he was working at Harvard and started the DrumConnection. After 1993, it has been based at the Arlington Center for the Arts, a nurturing nerve center for town artists.

Launching drumming education from a shop offered him a new beat. It also fills a gap, as many of the noted Boston area drum stores have closed after customers began buying on the Internet.

"If you want a real drum," the Boston native said, "you can't get it on the 'Net. You have to sit with people and make sure they have the right height and weight [drum]."

Education is always part of the mix: With the purchase of a drum comes a free lesson.