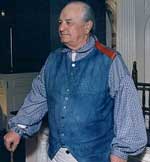 Frederick J. Sennott Jr., 18-year Arlington registrar and a longtime Town Meeting member, was known for his annual role in Patriots Day commemorations as Jason Russell, the Menotomy man shot and bayoneted on his own front steps by Redcoats retreating from the battles of Lexington and Concord. He died Nov. 13 at age 81.

Sennott, a founder of the Menotomy Minute Men, a group that marched in Colonial clothing, had Russell-like views, defending conservative values.
The Arlington resident died after a long illness at Mount Auburn Hospital in Cambridge.

Town Moderator John Leone led a moment of silence for Sennott at the opening of Town Meeting on Monday, Nov. 15. From April 27, 1992 to the present Sennott was town registrar, the person in the town clerk's office who records registered voters.

Born in Cambridge on June 18, 1929, to the late Mary (McNiff) and Frederick J. Sennott, Sr., he was a veteran of World War II and Korea, and was retired from the US Army. He was the husband of Estelle (Weston) Sennott.

Visiting hours were held Nov. 17 at the Keefe Funeral Home. The funeral service and interment are private.

In lieu of flowers, donations in his memory may be made to Menotomy Minute Men, Attn. John Graham, 7 Jason St., Arlington, MA 02476, or a charity of choice.