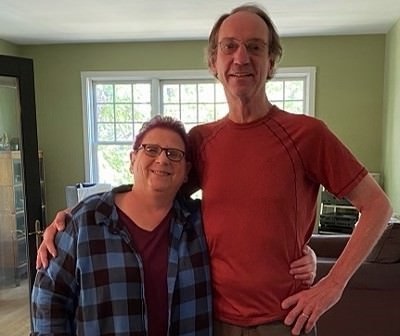 On July 19 it was one year since Jeff Thompson was diagnosed with ALS, and during that time his condition has worsened, but he and his wife, Sue, have learned some important lessons: Be prepared before the next thing happens so you’re ready; live each day the best you can, even if it’s doing something simple, and don’t lose your sense of optimism.

It hasn’t been easy. Jeff was a carpenter who did fine woodworking but began having difficulty using tools at work or even buttoning clothing. After visits to doctors and numerous tests, he and Sue learned he had ALS, amyotrophic lateral sclerosis, better known as ALS, or Lou Gehrig’s disease. ALS is a progressive neurodegenerative disease that affects nerve cells in the brain and the spinal cord.

According to the ALS Association, once ALS starts, it almost always progresses, eventually taking away the ability to walk, dress, write, speak, swallow and breathe, and shortening the life span; the average survival time is three years.

Jeff now struggles with weakness in his hands and arms so that he drops things or takes five minutes to do something that would have taken seconds. He is in the early stages of having difficulty chewing and speaking. “By fall, he will have a feeding tube,” his wife says. “They like to do this when they think it’s about six months before you’ll actually need it, so you don’t have to struggle, because it’s a tough decision and hard to get used to.”

Sue, meanwhile, is virtually blind. She had long had vision problems because of an immune disorder she had when she was a child, but her vision has worsened. She can no longer see herself in the mirror very well, as her hair is now white and there is no contrast. So her hairdresser asked whether she’d like to dye it purple. She said yes and continues to do that. In typical upbeat Sue fashion, she laughs and says purple is her favorite color anyway.

For five years, Sue worked at Firefly Moon, a gift store that moved from Arlington to Lexington in 2016, and many customers got to know her. Now she and Jeff rely on disability income. Despite these hardships, the couple continues to be amazed and grateful to the Arlington community, which has helped in numerous ways. They have received donations as well as gift cards, cookies and even medicine from their veterinarian.   There has been resounding support from people in Arlington, she says.

Their house is old and small and not adaptable to someone with disabilities. Friends who own a condo in Arlington are renting it to the couple for an affordable amount. Because the building is relatively new, it complies with the Americans With Disabilities Act, with wide hallways and a bathroom that a wheelchair can roll into. There are no thresholds, and the building has an elevator. “Frankly,” says Sue, “it’s even fantastic for me. I got some bad news about my vision, which is that it’s not responding to treatments. I get a Prednisone shot every five weeks, but it’s no longer helping.

The couple is learning not just how to cope with disabilities, but what those ailments will mean for the future. Jeff’s speech has been affected, and he sometimes speaks in a whisper or very low volume. He is working with the Jay S. Fishman ALS Augmentative Communication Program at Boston Children’s Hospital, which has developed a synthesized voice that sounds similar to Jeff’s speaking voice. Jeff is recording numerous phrases, such as “I need a drink,” or “I am hungry, “or I’d like to listen to Tom Waits.” When it becomes too hard for Jeff to speak, he will have the ability to communicate using the synthesized voice and his phone.

Because Jeff’s voice has changed and Sue can no longer see his facial expressions, she doesn’t always know the tone of his conversation, whether he’s smiling, for example.

“What I've learned in the past year is that every little thing makes a difference,” says Sue. “When we were buying glasses for the new apartment, we bought glasses with really strong stems, so Jeff has something to grab. His hands are too weak to get comfortably around a regular class and hold on to it.

“There are so many little micro things that add up and make life challenging. His fatigue is off the track, and he often needs naps three times a day. At night, he sleeps 10 or 11 hours,”

The couple does its best to enjoy what they can. “It’s amazing how much this is our lives,” says Sue, “his ALS and my disability. And yet we have fun, we laugh, we watch YouTube on the TV. We cook.”

An organization called Compassionate Care ALS, based in Falmouth, is providing support. “The man who runs it says you can go to others for medical stuff, but we’re here for love and support,” Sue says.

An upbeat person, Sue tries to focus on the present. “Our lives are pretty complicated. Under all these circumstances we do OK, but none of this is good or fun, so we have to find fun on our own. We work very hard at it. By that I mean it’s not that we sit down and say we have to do something fun; it’s who we are as a couple. We make that a part of living and a part of life.”

It might mean something as simple as sitting on the balcony of their new apartment, eating some ice cream and doing some people-watching.

“You can’t run away,” she says. “You take the bowling ball as it comes and knock down as many pins as you can.” She laughs: “Not that either of us bowl anymore.”

Feb. 19, 2016: Firefly Moon: Closing sale in Heights as it opens in Lexington