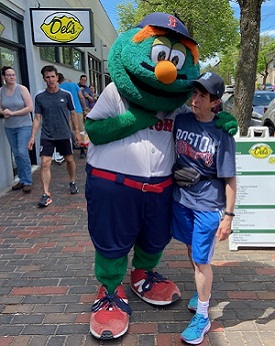 UPDATED May 15: You may have seen Marianne Comeau doling out paddles for canoes at Spy Pond in summers past. Or at the Ed Burns rec center working with kids. Or simply jogging around town, something she has done since 1979.

The affable friend to police officers who knows when house fires hit shows up all over town.

When Wally the Green Monster visited for the ribbon-cutting Saturday, May 14, at Del's Lemonade, in Brattle Square, Marianne was there -- in body and in spirit. She helped cut the ribbon, welcoming Del's, here since August.

The longtime resident has a real connection with Wally, the Red Sox mascot.

"I remember the day in April of 1997 when Wally came out the left-field door at Fenway," she told YourArlington. At the time, she was doing game promotions for the Sox. "Weeks later, I was asked to be Wally's escort around the park and on special appearances."

That included working with Wally and all the Major League Baseball mascots during the 1999 All-Star Game. She took them in an open trolley for appearances throughout Boston.

Comeau worked for the Red Sox in the mid-to-late '90s, earning credit as an intern while attending UMass/Amherst.

Another thrill: She was chosen to audition to be the public-address announcer and was honored in a pregame ceremony as an outstanding employee.

I am where I am today as the players were able to see me with their kids and others on the tours, and they said I belonged working with kids."

She recalls Sox reliever Bob Stanley calling her "10k," referring to her running. She said that Tim Naehring, a Sox infielder in the 1990s, was "a huge mentor .... I challenged him to hit a home run on my running anniversary, and he hit a grand slam."

Wally cuts the ribbon at Del's as Comeau and Rep. Sean Garballey are among the participants.

In the fall of 1999, she became an intern at a training village run by Ron Bur, to a Boston Patriots football player who died in 2003.

But her connection to the Red Sox is in her blood. Page through the 2004 book Fenway Lives: The Team Behind the Team, by Bill Nowlin.  You'll find references to her on pages 67 and 86.

"I am where I am today," she said, "as the players were able to see me with their kids and others on the tours, and they said I belonged working with kids."

She also worked part time at Arlington recreation while in college, sticking with it after graduation. She is now in the rec's after-school program, summer camp and the rink.

"This June I will be 42 years in same job" with the town, she said, praising town employees "who started me on right job path and told me not to quit things. I don't. I work hard at everything and love it."

Among those she thanks are police officers, those in the recreation department and the priests at St. Agnes and St. Camillus.

"With ADD and dyslexia," she said, "no one thought I would go anywhere."

In 1997, Comeau helped Wally emerge to meet the public from the base of the 37-foot Green Monster, a legend said to come originally from a Fenway swamp.

He faced the world, and so has she.

This reporting demonstrates your donations at work to support democracy here. YourArlington is a 501(c)(3) nonprofit.Your contributions are tax-deductible. Donate here >>