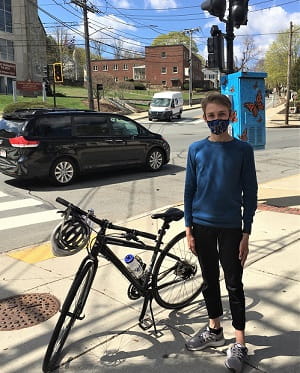 Petru Sofio at the Mass. Ave. and Appleton, a dangerous intersection under town review.

The 15-year-old Arlington resident is an avid bicyclist, commuting to and from his home in the Heights to Arlington High School as part of his daily routine. That daily route, in addition to errands and touring, has given him a handlebar view of biking in town.

“I think a bicycle is a practical and cleaner way to get around, and we need to work on making that safer and more accessible,” said Sofio.

His bicycle education started even before he could walk, strapped into a child carrier on his father’s back.

“I would put Petru into the pack, put a helmet on his head and ride to Harvard Square,” says Chris Sofio, his dad, also an avid bicyclist. Both parents taught Petru to ride when he was about 5 years old, encouraging his independence through two-wheeled mobility.

“When he was 12 years old,” his father said, “he’d bike the Minuteman Bikeway from Bedford to Arlington all by himself.”

As Petru expanded his riding range -- bicycling through adjacent cities Somerville, Cambridge and Boston, and taking family trips on the weekends to ride around Massachusetts and New Hampshire, he developed a deepening interest in transportation infrastructure.

“I’ve always been interested in traffic, signals and bike lanes,” the teen said. He realized that each town and city took a homegrown approach to bicycle transportation – from road conditions and lane markings to bike-path maintenance.

In Cambridge, the Binney Street bike path features curbside and elevated bike lanes using parked cars as a buffer for bicyclists from car traffic as well as shielding the rider from “dooring” – when a driver throws open the car door into the path of an approaching rider. Arlington’s recently designed Mass. Ave. Corridor Project opted for bike lanes that run outside the parking lane and next to the travel lane creating the potential for a situation called “close passing.”

“Close passing is terrifying,” says Sofio, noting cars passing within three feet of a rider is a problem in many areas along the corridor despite the marked bike lanes. The exposed lane creates additional challenges when vehicles use the bike lane as a temporary parking space or as a loading zone forcing the rider outside their bike lane and into the adjacent travel lane.

What you see when you ride along

In a ride this writer took with Sofio, a large delivery truck was parked in front of Cambridge Savings on Mass. Ave. at Pleasant blocking the bike lane (see photo). Petru dismounted, took a short video of a group of bikes swinging wide past the truck, posted it to his Twitter account and called the nonemergency police dispatch number to report the violation. 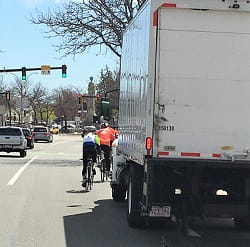 “I feel like we have to do more to educate drivers about sharing the road with bikes,” he said.

His heightened awareness of bike safety and accessibility has turned him from a straight-forward bicycle enthusiast and into a bike activist focused on policy-making and reform. He attends many of the transportation meetings in Arlington, such as the Bicycle Advisory Committee and the Transportation Advisory Committee (TAC). He’s enthused about the Connect Arlington Sustainable Master Plan, a 20-year strategy to create a “safe, reliable, multimodal transportation network that meets the needs of all people of all ages and abilities.”

The January 2021 draft plan features a protected bike lane and buffer on Broadway in East Arlington, design elements that create safe passage for even the town’s youngest or vulnerable riders.

Len Diggins, a Select Board member who also sits on the committee, says, “Petru has an agenda. You understand where he’s coming from. He’s very respectful, and that’s the kind of dialogue I want to have. I’m looking forward to seeing him and people like him getting involved in government and welcome his input.”

During our ride, Petru noted burned-out signals, inoperative call-buttons and short light cycles. He calls the Department of Public Works “responsive” to his punch-list of concerns given the scale of infrastructure needs in town. He also praised the redesigned Lake Street crossing at the Minuteman Bikeway, as well as improved signs and lane markings throughout Arlington.

“A lot has been done, but there’s still a lot to do,” he says. “I’m interested in transportation safety – pedestrians, bikes, cars,” notes Sofio. “But as a rider, bicycle safety is my number one concern.”

Elaine Shea, who stood up for abused women, dies at 80